Is It Illegal to Ride a Bicycle While Under The Influence of Alcohol?

Technically speaking, no, there are no official Washington state laws that explicitly prohibit a person from riding a bicycle while they are under the influence of alcohol or drugs. 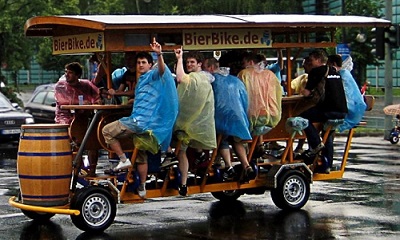 Because Washington state law does not consider bicycles to be “motor vehicles,” the specific laws regarding driving under the influence of alcohol or drugs do not apply to a person operating a bicycle.

That’s not to say that riding a bicycle under the influence of drugs or alcohol is OK, or that a bicyclist won’t be disciplined if they are too impaired to ride safely. Here’s a quote from Trooper Chris Webb of the Washington State Patrol (WSP) that explains this issue a bit further:

“Law enforcement does have the authority to take a bicyclist into ‘protective custody’ if they feel the subject is too intoxicated to travel. The impoundment of a bike is also permitted if the officer determines it is necessary to reduce the risk of threat to public safety and if no other reasonable alternative exists.”

Since bicyclists are tasked with sharing the roadways with drivers of motor vehicles, they are therefore also subject to many of the same laws that were perhaps originally designed to govern the behavior of motorists.

But as we’ve discovered recently, many people throughout Washington state are unclear about exactly which traffic laws apply to bicyclists and which do not. Namely:

“Can a bicyclist be busted for cycling under the influence of drugs and/or alcohol?”

Technically speaking, there is no official Washington state law that explicitly prohibits bicyclists from riding while under the influence of alcohol or drugs.

Bicycles are not technically considered “motor vehicles” under state law. As a result of this, state laws regarding driving under the influence (DUI) - aimed at reducing the frequency of drunk driving accidents - do not apply to bicyclists in the same way that they apply to people driving a motor vehicle.

That’s not to say that it’s OK to operate a bicycle while under the influence of alcohol or drugs, or even that a bicyclist would get away with riding impaired. Cycling under the influence puts the bicyclist at risk of being seriously injured in a collision, as well as causing accidents between other motorists.

According to Trooper Chris Webb with the Washington State Patrol (WSP), there are a number of precautions that officers may take if they encounter a bicyclist who is overly drunk or high on drugs.

“Law enforcement does have the authority to take a bicyclist into ‘protective custody’ if they feel the subject is too intoxicated to travel,” explains Webb. “The impoundment of a bike is also permitted if the officer determines it is necessary to reduce the risk of threat to public safety and if no other reasonable alternative exists.”

So, according to Webb, impaired bicyclists who don’t appear to be a danger to themselves or the general public are unlikely to be stopped or cited for bicycling under the influence. However, if a bicyclist does appear to be too intoxicated to ride safely, then the police have a few different options for resolving the issue, the most severe of which being the ‘protective custody’ that Webb previously mentioned.

If you have been involved in a bicycle accident, contact Davis Law Group.