$250,000 Settlement For Victim With Genital Injuries 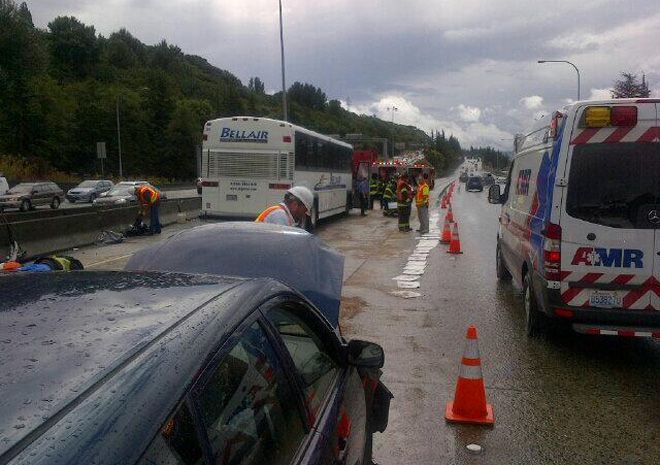 In December, 2007, our client JC was driving his 1994 Honda Civic while his friend rode as a passenger in the front seat. East Marginal Way is a four lane road, with two lanes in each direction. JC and his friend were headed north in the outside (curb) lane.

At approximately the same time, a tractor trailer semi-truck hauling lumber was moving in the same direction in the adjacent (inside center) lane. The truck was ahead of JC’s vehicle. The truck then attempted to make a right turn from its lane into a private parking lot. While performing its turn, the truck crossed into JC’s lane and collided into his vehicle.

The back portion of the truck collided into and over JC’s vehicle. The semi-truck then started to drag JC’s vehicle and pull it toward the rear wheels of the truck. While being dragged by the truck, JC and his friend were placed in imminent fear for their lives.

They reasonably believed that the truck’s back tires would eventually run over the smaller Honda, and crush both of them to death. Both men rolled down their windows and/or opened their doors in an effort to jump from the vehicle.

JC’s vehicle was totaled in the crash. The truck driver had no knowledge of the presence of the Honda, and did not know there was a collision until he heard the JC and his passenger's screams. JC suffered serious injuries while attempting to jumping out of his driver-side window.

The Tukwila Police Department investigated the trucking accident, and officers determined that the logging truck was solely responsible for causing the collision. However, the trucking company said that it believed that JC was comparatively negligent for jumping out of the car while it was being dragged under the semi-truck. The trucking company alleged that it was unreasonable for JC to fear for his life and jump of the vehicle to escape death and/or serious injury---a crazy assertion.

JC received injuries to his neck, shoulder, back, and right testicle. Later that day, he was seen at Virginia Mason Hospital. When conservative medical care failed, he underwent surgery consisting of a right epididymectomy (partial removal of the right testicle).

The surgery was somewhat successful in that in relieved much of his pain and discomfort. But JC still experiences pain with medium to strenuous activities, including sexual activity. He has been told that this will be pain that he will experience for the rest of his life.

JC has undergone a semen analysis test that showed he has a very low sperm count with low motility. He is now very concerned with his ability to have children in the future. He also experiences discomfort and emotional anxiety when engaging in sexual activity.

Through a negotiation process that also included a mediation, the personal injury attorneys at Davis Law Group were able to successfully negotiate a $250,000 settlement on behalf of our client, JC.