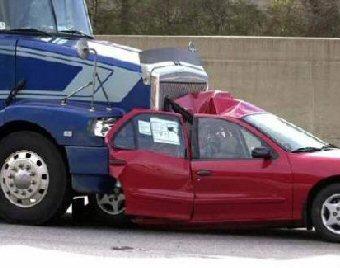 Our client, Mark, hired Davis Law Group after being critically injured in a trucking accident in Federal Way back in 2011.

On an otherwise regular weekday, Mark was driving along State Route 18 when the truck driver failed to slow for traffic conditions and rear-ended him. The initial impact was so intense that it sent Mark’s vehicle crashing into the vehicle in front of him as well.

Mark experienced serious back and neck pain immediately following the accident and was taken to a nearby hospital to be evaluated. At first he was diagnosed with various sprains, strains, and pulled muscles throughout his back and neck. Several months later, he was eventually referred to a spinal surgeon for further examination, and an MRI revealed that he had a torn disc in his spine.

Before he was diagnosed with the torn disc, Mark had initially attempted to negotiate his claim with the insurance company on his own because he did not believe he needed the assistance of an attorney.

Due to the extent of his injuries and mounting medical bills resulting from the accident, however, Mark hired attorney Chris Davis of Davis Law Group to represent him in a claim against the at-fault driver and his insurance company.

Mark eventually underwent a lumbar laminectomy – medical terminology for a surgical procedure on the lumbar region of the back – to repair the damage from the collision. In this particular procedure, a part of the bony arch of a vertebra is removed to help relieve pain.

At first, the insurance company representing the at-fault driver only offered to pay for most of Mark’s medical bills, which would have left him with the remaining bills and nothing to pay for the future medical care he would require to fully recover from his back injuries.

Because doctors had advised Mark that he would require at least one more follow-up surgery in the future, accepting this offer from the insurance company would have put him and his family in a difficult position. It became vital that Mark recover compensation that would allow him to continue on his path to recovering from his injuries.

After years of back-and-forth negotiation with the insurance company, we were eventually able to negotiate a $300,000 settlement on behalf of Mark and his family.

We recovered a $300,000 settlement for Mark, who was injured in a crash with a semi truck in Federal Way. The insurance company's initial offer wouldn't have even covered Mark's medical bills, let alone the future surgeries and treatment.