In July of 2014, our client C.C. - an executive working for a high-tech company - was injured in an auto accident that was not his fault. His vehicle was completely stopped in rush hour traffic when he was rear-ended at a speed of 40 mph or more. His air bags deployed; his vehicle was pushed into the median; his vehicle was not drivable from the scene and would later require approximately $18,000 in repairs.

C.C. was holding on to the steering wheel at the time of the crash. On impact, tremendous forces traveled through the vehicle and into C.C.'s wrist and arm. His head was thrown back and forth violently. He did not realize what had happened until a voice came over his car’s in-vehicle emergency service saying, “…you’ve been in a serious accident. We’ve called the police. Help is on the way.”

He saw a doctor immediately after the accident. He reported pain complaints in his neck, shoulder, forearm and wrist. He also reported that he felt dazed and soon developed ringing in his ears; experienced blurred vision and serious headaches.

C.C. had never suffered injuries to his neck, shoulder, forearm or wrist before the accident. He had never received any medical treatment on those parts of his body. And he had not suffered any sort of head injury for more than 45 years aside from a minor concussion at just nine years old.

As a life-long do-it-yourselfer and trumpet player, C.C. desperately wanted to get well and return to his normal activities but was limited by the back, neck, forearm and hand problems. However initially his brain injury was of greater concern. The accident-induced traumatic brain injury was seriously impacting his short-term memory, concentration and speech. His TBI was making it difficult to perform at work. He had to work long nights and weekends just to keep up--which was even more difficult because the pain in his neck, shoulder and arm made it difficult to sleep at night.

Eventually C.C. made the decision to look for a less stressful and less challenging position, so he could try to find some work life balance and focus on finally solving his medical problems. But this decision required him to walk away from the lucrative stock grants that were a major part of his compensation package.

For more than two years following the collision, C.C. tried to work with his own insurance company, Safeco Insurance, because the at-fault driver was underinsured given the extent and cost of his injuries. But once C.C. had his first surgery, the insurance company changed course and began to play hardball.

Suddenly he knew that he would need legal representation in order to get the insurance company to fulfill its obligations. He and his wife decided to call Davis Law Group. 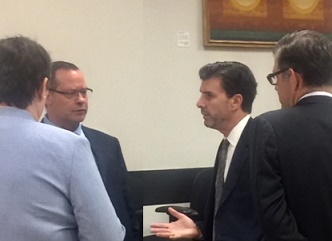 Photo: DLG attorneys and the client discussing the case.

During trial Safeco’s denied that C.C. injuries were related to the accident. Safeco hired their own doctors to review C.C.’s medical records and state that he should have recovered from his injuries within 3 to 6 months. Safeco’s doctors said that the treating physicians should have taken photographs of bruises. The attorney hired experts to devalue cost of medical treatment and argue that C.C. should have negotiated with his doctors to get his medical bills reduced. Safeco’s lawyer distorted the truth in order to try to discredit the case. And Safeco tried to distract the jury with unrelated facts or non-issues.

At trial Safeco’s attorney asked the jury to award no more than $23,000 for medical bills. Safeco stated that a total verdict of $123,000 (past medical, future medical, lost wages, pain and suffering, etc.) would be fair.

Safeco Insurance Company’s last pre-trial settlement offer was $100,000. Client's medical bills were more than $125,000. During trial Safeco denied injuries were accident-related; devalued the cost of medical treatment; distorted the truth to discredit the client, and tried to distract the jury with unrelated facts or non-issues. Jury verdict in favor of our client $986,420.