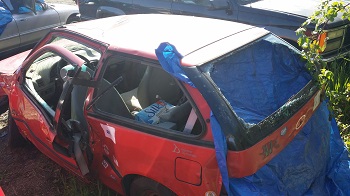 In March 2016 J.P. was driving his 1994 Geo Metro east on Pacific Highway in Everett, Washington, approaching the intersection with Pine Street. The intersection is controlled by stop signs for traffic on Pine Street. As J.P. lawfully proceeded east, through the intersection the driver of a 2011 Toyota RAV4 darted across Pacific Avenue, slamming into the front driver’s side of J.P.’s car in the intersection. The impact forced J.P. into a car stopped on northbound Pine Street, a 2004 Ford Focus.

Everett Fire Department had to use the jaws of life to remove J.P. from his totaled vehicle, and paramedics transported him to Providence Everett Medical Center on a cervical collar and back board.

J.P. is a 40-year-old married man and father of two who loves spending time with his family. His hobbies include softball, jogging and snowboarding. J.P. works as a carpenter. Up to the time of the collision, he was in great health, pain-free, and able to perform professional and personal work without any discomfort or pain.  The accident changed J.P.’s life forever.

Washington law provides that the drivers on the road have the duty to exercise ordinary care and avoid causing a collision.  There is no dispute concerning liability in this matter. The driver of the 2011 Toyota RAV4 was negligent when she failed to: drive at a reasonably safe rate of speed, yield the right-of-way, obey a traffic control device, maintain a safe lookout, and otherwise obey the rules of the road.

The day after the accident J.P. hired a law firm in Everett that works on immigration and personal injury cases.  However, after working with the firm for more than a year he became dissatisfied and decided to research other firms.  In July of 2017 J.P. contacted Davis Law Group and decided to discharge is former law firm in order to work with attorney Chris Davis and his team.  Davis Law Group was able to negotiate a $1.2 million dollar settlement.