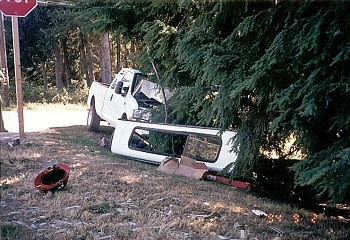 Former Davis Law Group client, 46-year-old Ed P., was injured in a car accident that was caused when another driver ran a stop sign at approximately 35 mph. Ed T-boned the other driver's vehicle and then ran into a tree. Both vehicles involved in the collision were declared a total loss.

Ed ran and operated his own residential and commercial glass company. He claimed losses in income related to his business following the accident, which left him with neck and back injuries - including disc protrusions at C4-5, C5-6, and C6-7 - post concussive syndrome and mild traumatic brain injury. He had a range of other symptoms and conditions due to the accident, and a neuropsychological evaluation confirmed ongoing cognitive, memory and concentration problems.

The insurance company for the other driver, Encompass Insurance Company, dug deep into our client's past medical history which revealed a prior whiplash injury from a car accident in 1999. A cervical MRI following that accident showed a bulging disc. The insurance company argued that his neck pain and symptoms were caused in large part by this previous accident. In 2008, Ed was injured again in another rear-end accident, and the insurance company was also able to argue at trial that this 2008 accident caused his neck injury to worsen.

Ed's past medical bills exceeded $25,000 and he also claimed past income loss of $83,000. Despite these amounts, Encompass refused to pay out the at-fault driver’s policy limits of $50,000 when demanded by attorney Christopher Davis. The client was then forced to incur substantial expense to prepare for trial. About one month before trial Encompass offered its $50,000 policy, but by this time the client had incurred additional litigation expense of several thousand dollars. The decision was made to reject the offer and try the case in court.

Insurance companies can, and often do, violate their obligation to protect their insured’s interests by not settling claims for significant personal injury when given the opportunity to do so. Although Mr. Davis had an opportunity to settle the case for the policy limits before trial, the actions of the insurance company made it clear that going to trial was the only way to get a fair settlement for our client.

Ed P. hired Davis Law Group after suffering life-altering back injuries and a traumatic brain injury that the insurance company blamed on a previous incident. Attorney Chris Davis took the case to trial and won a $362,500 jury verdict.