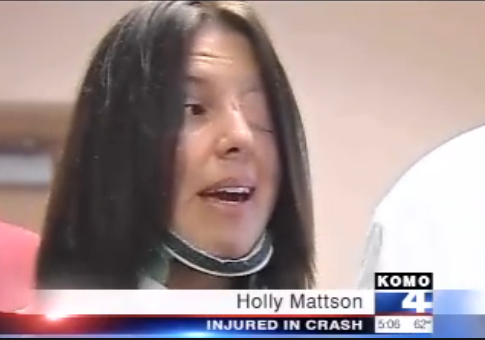 On July 26, 2010, Douglas Simmons III was driving his girlfriend, Holly Mattson, to the airport as she prepared to leave for a business trip when a tragic, preventable car crash claimed Simmons's life and left Mattson with a traumatic brain injury.

The couple was waiting at a red light at the intersection of Porter Way and SR 99 near the city of Milton in Mattson’s Volkswagen Jetta. When the light turned green, witnesses say Simmons slowly began pulling out into the intersection to make the left-hand turn.

That’s when a purple Honda Accord, driven by Virginia C. Ramsey, sped through the intersection against a red light and crashed into the driver’s side door of the Jetta occupied by Mattson and Simmons.

Police estimated that Ramsey was traveling at speeds of 80 to 90 mph in the moments leading up to the high-speed crash. Tragically, Simmons was pronounced dead at the scene while Mattson suffered a traumatic brain injury, among other serious and life-altering injuries, as a result of the accident.

Ramsey had originally been spotted acting erratically behind the wheel of a purple Honda Accord in a parking lot not far from where the fatal crash took place. A witness had called 911 to report a possibly impaired driver – identified as Ramsey – and police eventually located the vehicle in question.

However, Ramsey did not cooperate with officers’ attempts to apprehend her and instead fled on SR 99 at a high rate of speed before crashing into Mattson’s Jetta.

News reports indicated that Ramsey was an eight-time convicted felon and had a history of substance abuse. It was later determined that she was supposed to be under supervision by the state Department of Corrections (DOC), and had recently violated the terms of her probation. Furthermore, an investigation showed that DOC officials had information about Ramsey’s whereabouts that would have allowed them to apprehend her long before the fatal crash occurred, but failed to act on that information.

As a result, Holly Mattson and the Estate of Douglas Simmons III hired the car accident lawyers at Davis Law Group, P.S. to pursue a personal injury and wrongful death claim against defendants Ramsey, the DOC, and the City of Federal Way. The lawsuit claimed that while Ramsey had ultimately caused the fatal collision, the DOC had failed to adequately monitor and supervise a dangerous felon and that Federal Way police should have concluded their pursuit of Ramsey much sooner to avoid collateral damage.

The case ultimately went to a jury trial, and the defendants agreed to settle the case on the first day of that trial. In total, Davis Law Group was able to recover a $3.4 million settlement for the plaintiffs’ injuries, medical bills, lost wages, emotional damages, and other unspecified losses.

More Information About The Case

We successfully recovered a $3,400,000 settlement for the Estate of Douglas Simmons III and his girlfriend, Holly Mattson, after their vehicle was struck by an eight-time felon fleeing a police pursuit.