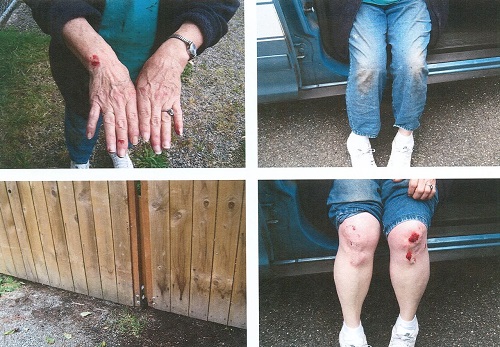 Our client, Danae, hired Davis Law Group after she was viciously attacked by a dog while walking her own dog on a public sidewalk in Seattle in 2010.

One summer afternoon, Danae was lawfully walking her small dog, Roscoe, on a leash in a neighborhood in North Seattle when she noticed a dog in the back yard of a nearby house. Upon seeing Danae and Roscoe in the street, the other dog began barking excitedly and jumping up and down on the gate of the fence.

Unfortunately, this caused the gate to open unexpectedly and free the dog from the back yard. The dog immediately chased after Danae and Roscoe and attacked them both. Danae attempted to pick up Roscoe to protect him from the escaped animal, but that dog pulled them to the ground and began dragging them across the pavement.

Danae started hitting and kicking the attacking dog in an attempt to scare it away, but she did not succeed. The dog continued to attack her and her dog for several minutes. Finally, a neighbor driving in the area witnessed the attack and came to Danae’s rescue by throwing a toy sword at the dog and scaring it away with her vehicle. The escaped dog eventually retreated into its own yard.

By the time the attack was over, Danae had suffered multiple dog bite wounds to both of her hands, her right knee, and other areas of her legs. She also suffered a fractured vertebra and multiple sprains and contusions as a result of being dragged across the pavement by the escaped dog. To Danae, the emotional trauma she experienced as a result of this vicious attack was just as painful as her physical injuries.

Roscoe ran away from the scene of the attack and was not found until 16 days later, when a random person found him in Kirkland, approximately 10 miles away from where the attack took place. Roscoe had visible bite wounds on his back, leg, neck, ear, and stomach from the attack and was extremely distressed when he was found.

Danae’s injuries took a significant amount of time to recover from, and the fractured vertebra actually worsened in the months following the attack. She accrued over $25,000 in medical bills as a result of medical treatment for her injuries, which included a surgical procedure to repair the damaged vertebra, and spent several months with limited mobility and independence. Danae’s wounds from the attack also resulted in significant permanent scarring. Roscoe also required multiple veterinary visits for medical treatment and to recover from his injuries.

We filed a lawsuit against the dog’s owners and their homeowner’s insurance policy on the grounds that they negligently allowed their dog – who had attacked and injured at least one person in the past – to escape from their yard and attack Danae and Roscoe.

The insurance company that provided the homeowner’s insurance coverage to the owners of the dog decided it was in the best interests of all parties involved to settle the case and avoid the costs of a lengthy jury trial. We were able to negotiate a $250,000 settlement on behalf of Danae and her family.

We recovered a $250,000 settlement for Danae, who was viciously attacked by an escaped dog in Seattle in 2010. Danae suffered from multiple wounds and a fractured vertebra from the attack.