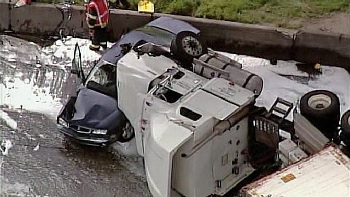 Our client in this case was a 36-year-old divorced man who was killed in a truck accident at a marked intersection in Seattle.

On an otherwise uneventful day, our client was driving to work in Seattle when was broadsided by a commercial moving truck. The truck driver failed to stop at a marked intersection, causing him to t-bone our client's vehicle. The truck driver was later cited by police for failure to yield the right of way to our client.

The impact of the collision caused life-threatening injuries to the innocent victim, and tragically he later died from his injuries. He left a surviving 7 year old daughter and grieving family members, who turned to Davis Law Group to represent them in a wrongful death lawsuit against the at-fault driver, the delivery company, and their insurers.

As is often the case in trucking accident cases, the at-fault delivery truck driver's insurance company initially attempted to cast blame onto our client for the accident, even though the truck driver received a citation for failure to yield to our client.

Our investigation showed that there was no evidence to support the insurance company's position that our client was responsible for the accident, which greatly increased the pressure on the insurer to cooperate fairly in settlement negotiations with our legal team.

After more than a year of negotiating with the insurance company and defense counsel for the at-fault driver's employer, the attorneys at Davis Law Group were able to successfully recover a $1,085,000 settlement on our client's behalf. This provided the victim's surviving family members, including his young daughter, with the financial security they deserve after losing such an important member of their family.