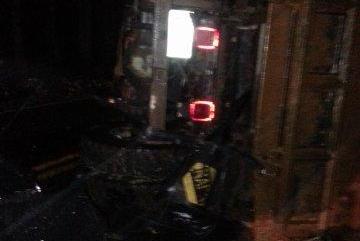 Davis Law Group, P.S. recently recovered a $1,050,000 settlement for a car accident victim who suffered a broken leg after a collision with a garbage dump truck.

Our client, MJT, age 60, was driving his Smart Car on Newberg Road near Granite Falls, WA in 2012. It was 4:30 PM during the winter, and police reports indicated that it was dark at the time MJT was driving.

Suddenly, without warning, MJT came upon an overturned dump truck in the middle of the road that had been operated by an employee of Questech Unlimited, Inc. The dump truck driver did not place flares or emergency triangles to warn other motorists because he claimed that he smelled gas which caused him to flee the truck immediately.

Due to the lack of lighting and the employee’s failure to adequately warn other motorists, MJT did not have sufficient time to stop his own vehicle and crashed into the undercarriage of the defendant’s dump truck.

In preliminary discussions, the defendants argued that MJT was at fault for his own injuries for not paying attention and using his cell phone. They also argued that another motorist had approached the overturned dump truck shortly before MJT did and was able to stop in time to avoid a collision.

A neighbor living 2 blocks from the crash site was outside and heard the dump truck overturn and crash.  The neighbor also said 1-2 cars approached the overturned dump truck and both were able to stop in time to avoid a collision.  The neighbor alleged the plaintiff was speeding when it went by the neighbor just seconds before plaintiff crashed into the truck.

The defendants initially denied any liability whatsoever for our client’s injuries, and they even went as far as to allege that the plaintiff was solely at fault for the trucking accident by accusing him of not paying attention.

The plaintiff was prepared to take the case to a jury trial, which would have resulted in significant legal expenses for both sides involved.

We recovered a $1.06 Million settlement for MJT, who suffered a broken leg and also contracted MRSA after being injured in a motor vehicle collision. The defendant's insurance company attempted to blame our client for the crash.