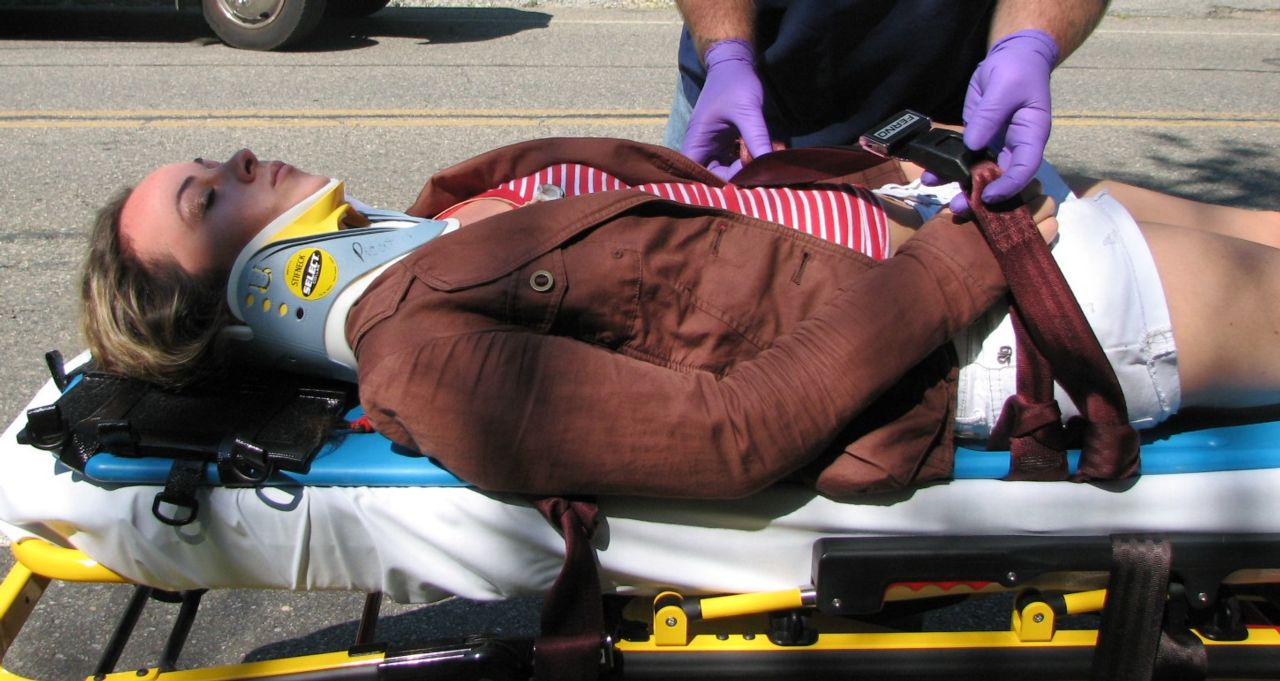 Our client, Cathy, came to us after a serious trucking accident that turned her life upside down.

Cathy was a passenger in a pickup truck with her husband behind the wheel. They were stopped in traffic inside a tunnel when Cathy noticed that a freight truck was approaching quickly from behind them.

The next thing she knew, her truck was turned around in the lane, with traffic facing her. The force of the impact had been so extreme that her truck was pushed into the vehicle ahead of her, and that vehicle struck the one ahead of it in a domino effect.

Rushed To The Hospital With Serious Injuries

An ambulance crew transported Cathy to the emergency room on a backboard. There, doctors discovered that her neck was broken at the C2 vertebra. Blood was clotting in her neck, a dangerous condition that needed immediate treatment. She also had three cracked ribs, a cracked sternum, and a concussion. The trauma of the accident was so severe that the muscles on the right side of her face went slack, and she was unable to talk for hours. She was in the hospital receiving life-saving care for three days.

To stabilize her broken neck, doctors put her head in a halo brace. A metal ring was placed around her head and attached to her skull with metal pins. Vertical rods connected the halo to a vest that went over her shoulder and across her chest. This prevented her from moving her head and neck in any direction while the crucial bone of her broken neck vertebra healed.

The driver of the freight truck was cited for speed too fast for conditions inside the tunnel. As is often the case in accidents involving commercial vehicles, the at-fault driver quickly tried to blame someone else for the accident, claiming that he was either hit, cut off, or forced into the lane behind our client. Because accidents involving semi-trucks and other commercial vehicles can cause such severe injuries, trucking companies have a strong incentive to vigorously defend claims or to blame anyone else on the road for an accident. While Cathy was still in the early stages of recovery, insurance adjusters and lawyers were already in the process of trying to minimize their client’s losses.

Recovery would be slow and difficult. Her injuries were so severe that she needed to take four months off work. In addition to her initial injuries, having to compensate for the lack of movement in her neck caused shoulder problems. Muscles in her back were also damaged by the extended period of time she had to spend wearing the brace. When the halo brace was removed, it left scars on her forehead where the pins had secured the metal ring to her body.

Cathy realized quickly that she needed someone on her side who understood how the insurance system worked. She and her husband contacted the experienced team of attorneys at Davis Law Group. Our firm represented both of them in their fight for justice. Insurance adjusters initially offered only $400,000 to pay for Cathy’s medical bills and compensate her for her injuries. With the help of Davis Law Group, that offer was increased by more than $300,000.

In the end, our team recovered a $775,000 settlement on Cathy's behalf, which secured her financial future so that she could continue to receive the important medical treatments she needed to continue on her path to recovery. Davis Law Group was honored to represent Cathy and her husband.