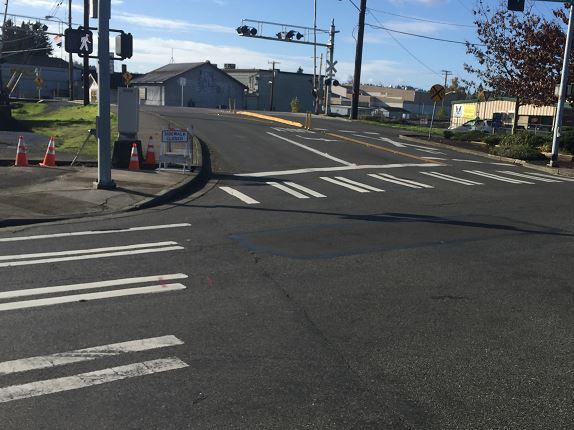 In November 2015 our client Ron, a community health administrator, was walking in the crosswalk with the signal at the intersection of West Stewart and 4th St Northwest in Puyallup when the 23-year-old driver of a 2005 Chevy pickup truck making a left turn slammed into him.  Ron was the victim of a serious pedestrian accident.

Ron was lawfully in a marked crosswalk when he was struck.  He was crossing with the Walk signal.  He had the right-of-way and the driver had the duty to yield.

After the collision Ron was unable to speak to any of the first responders.  Central Pierce Medics transported him to Good Samaritan Hospital.  Later that evening, his conditioned worsened and he was transported to Tacoma General Hospital.

This tragic accident disrupted and changed Ron’s life.  For months he was unable to perform his usual everyday tasks such as dressing, tying his shoes, washing and combing his hair, taking a shower or bath.  He also was unable to enjoy life with his wife and two young children.

But the collision has also left him with a permanent injury.  Ron has lost his sense of smell and with that, his sense of taste is almost completely gone.  Food that was once enjoyable and part of his social life, is now empty calories.  Simply put Ron eats to consume calories.  His sense of taste is either salty or sweet.  The beer he once enjoyed with his friends, now tastes like dirty salt water and wine tastes like burned liquid candy corn. Although he is able to sense a “heat” sensation when eating something with hot spices like a rib eye steak, he cannot taste the spices themselves. Ron is not able to differentiate the various types of food.

Difficult Transition To A New Life

It does not stop there however.  When Ron goes to the movies with his children, he no longer can enjoy popcorn, soda, or candy.  Even ice cream has a horrible flavor to it.  He no longer craves food. Now when he eats food, he either “tolerates it” or it is “horrible.”  There is no pleasure in eating food anymore.

Ron now lives in a kind of fear that many people cannot imagine.  He cannot tell if food has gone bad, if food is burning in the oven, if his children are playing with matches, if there is a gas leak, or if something is on fire.  These are just a few of the issues Ron will face for the rest of his life.

Unfortunately, the at-fault driver’s insurance company initially only offered $150,000. When he realized this amount would not have even covered the total of his medical bills resulting from the accident, Ron called the team experienced attorneys at Davis Law Group. After months of negotiations with the insurance company, we were able to secure a $645,000 settlement for Ron.