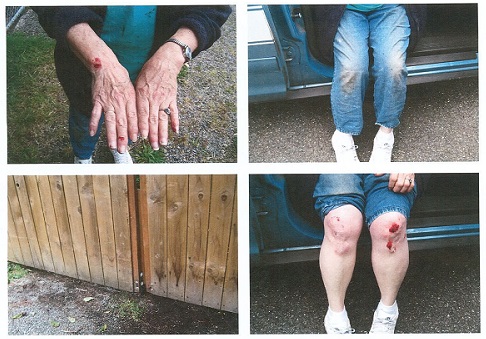 In June of 2010, our client was walking her dog on a leash on the sidewalk when a pit bull mix dog that was enclosed in a yard began barking and jumping on the fence gate causing the gate to open. The pit bull mix immediately escaped the yard and ran toward our client and her dog.

As the victim attempted to pick up her dog and leave the area, the pit bull mix began to viciously attack and bite her dog's head and neck, not letting go. The woman yelled and kicked at the attacking dog, but the dog would not back down.

During the struggle, our client and her dog were pulled to the ground by the attacking dog and dragged across the pavement. The woman was punching, hitting, and kicking at the pit bull mix as she was being attacked, but the dog continued its aggression.

Finally, a neighbor came to the aid of our client as she was returning to her home near the scene of the dog attack. The neighbor threw a child’s plastic toy at the dog to break its concentration and then then placed her vehicle as a shield between our client and the pit bull. Thanks to the heroics of the neighbor, the aggressive dog retreated back through the open gate into the homeowner's yard.

As a result of the pit bull attack, our client suffered physical injuries in the form of dog bites to her hands and right knee, lacerations and abrasions to her body, as well as neck and low back pain.

Just as painful as her physical injuries are the emotional pain and suffering she suffered as a result of being repeatedly bitten and dragged by an attacking dog across the street, watching the victimization of her beloved pet. Her medical bills exceeded $26,000. Attorney Chris Davis was able to successfully negotiate a $250,000 settlement for the victim of this brutal attack.

The attorneys at Davis Law Group recovered a $250,000 settlement on behalf of a woman who was viciously attacked by a pit bull dog while walking her own small dog. The pit bull had escaped through an opening in the homeowner's fence.