Our client, Josh R., came to Davis Law Group after being badly injured in a car accident.

Josh was driving on I-5 one day when he had to make a sudden stop, and another car slammed into him. That car was then hit by other cars, further injuring Josh in what turned out to be a 5-car pile-up. Josh had bulging discs in his neck, neck and shoulder pain, and numbness and tingling in his arms and pinkie fingers—a common sign of neurological damage.

Josh initially went to another law firm for help, but his attorney ended up having health problems that prevented him from working on Josh’s case. That’s when Josh contacted Davis Law Group. 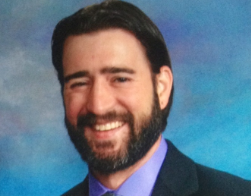 Years after the accident, Josh was still in pain and facing down surgeries to regain a portion of his former functionality. An active hockey player and outdoor sports enthusiast before the accident, Josh was now struggling with pain that never seemed to fully go away; minor victories in pain control with the use of painkillers, injections, steroids, and physical therapy were followed by agonizing flare-ups. Just holding his arms above his head would cause them to tingle and become numb.

Finally, after years of struggling to get better with non-surgical treatments, Josh underwent an anterior discectomy and fusion. A surgeon removed the damaged disc between his vertebrae, and filled the open space with a bone graft.

But the pain and suffering Josh had already experienced had taken a toll on his competitive spirit, and he was feeling uncertain about his long-term future.

This surgical procedure decompressed his spinal cord and the painfully irritated nerve roots of his cervical spine. The cost of this procedure varies widely between hospitals; some change up to $129,000 for the surgery, diagnostic studies, instrumentation, and hospital stay.

The surgery helped Josh return to his normal life. He was even able to kayak, working the muscles in his neck and shoulders, without pain. And the $200,000 settlement recovered by the experienced team of attorneys at Davis Law Group provided Josh with the peace of mind he needed to focus on his recovery and get his life back on track.

Davis Law Group was able to recover $200,000 to help Josh pay for his medical bills and the time he had to take off work after the accident.