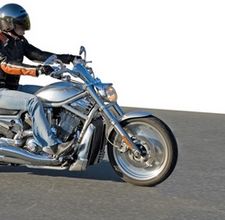 Our client, Kurt, was riding his motorcycle on the highway when he was cut off by a car. He tried to avoid the collision by laying his bike down, and ended up sliding approximately 100 feet on the asphalt.

He suffered multiple broken ribs, a partially collapsed lung, a puncture wound to his knee, a concussion, injuries to his hand and fingers, soft tissue damage, and a fractured scapula.

Kurt spent nine days recovering in the hospital, but his recovery was only just beginning. He had been wearing full protective gear and a helmet, but his injuries left him unable to remember anything at all from the morning of the motorcycle accident.

With a description given by a witness to the accident, police found the defendant driver, who had left the accident scene even though the witness had told him to stay. A police officer who responded to the scene wrote in his report that the at-fault driver didn’t seem to care for his victim’s well-being and had left the scene because he didn’t want to be late for an appointment. He was cited for negligent driving.

Sometimes, a driver may not even realize that they caused an accident, or may have felt a bump without realizing that they struck a motorcyclist. In cases like Kurt’s, the at-fault driver may not be willing to acknowledge that their negligent driving caused an accident, even after being cited by police; they may continue to claim that the motorcyclist just “lost control” for reasons unrelated to their own behavior on the road.

The Financial Stresses Of Being Injured In A Motorcycle Crash

Kurt’s hospital bill alone was over $40,000. Even after his discharge, he needed ongoing treatment. Kurt was an experienced motorcyclist who had been riding off and on for nearly 40 years. Once an active retiree, his ongoing pain left him unable to enjoy many of the activities he loved.

Our team was able to successfully recover a $125,000 settlement for Kurt so that he could cover his medical bills and other damages, and get back to living the life he loved. The settlement also afforded Kurt the future medical treatment he would need ot make a full recovery.

Davis Law Group was able to recover $125,000 to help compensate Kurt for his medical bills and loss of enjoyment of life.