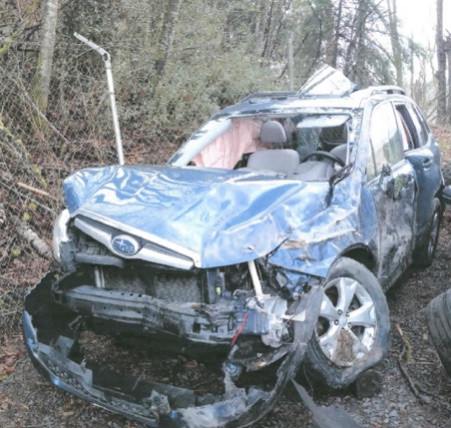 On December 28, 2016, at approximately 10:15 a.m., Donald was traveling eastbound on State Route 19 and was approaching SR 104 in Port Ludlow. As he approached the SR 19 intersection, a driver heading southbound on SR 19 near SR 104 failed to yield to oncoming traffic at the intersection driving at a high rate of speed, colliding her vehicle into Donald’s vehicle.

The collision was significant. Donald’s Subaru Forester rolled seven before making impact with a street light. Donald, a 77-year-old who enjoys spending time with his son, fishing, boating, and gardening, had his life turned upside down.

The at-fault driver was cited for second degree negligent driving. There was nothing Donald could do to avoid the collision. He was airlifted to Harborview Medical Center in Seattle. His injuries were extensive.

Donald suffered injuries to his head, back, leg, and associated body structures.

Donald continues to experience, a significant loss of enjoyment of life. He was fairly healthy before the collision and since then has not been as active as he was before. He must perform exercises at home on a regular basis just to maintain his symptoms and avoid flare ups. His return to recreational activities has been slow and guarded for fear of re-injury.

The collision disrupted and changed Donald’s life. He had never had vertigo symptoms and pain to his right leg prior to this collision. He is unable to perform his usual everyday tasks such as home maintenance projects and yard work.

Ultimately after a year-and-a-half of negotiations with the insurance company, Davis Law Group, P.S., was able to recover a $100,000 settlement on behalf of Donald. The final settlement included not only Donald’s medical bills, but also compensation for his past and future non-economic damages, including pain and suffering (both physical and mental), loss of enjoyment of life, and inconvenience.

We helped recover $100,000 for our client, who was involved in a rollover motor vehicle accident caused by a driver’s failure to yield.