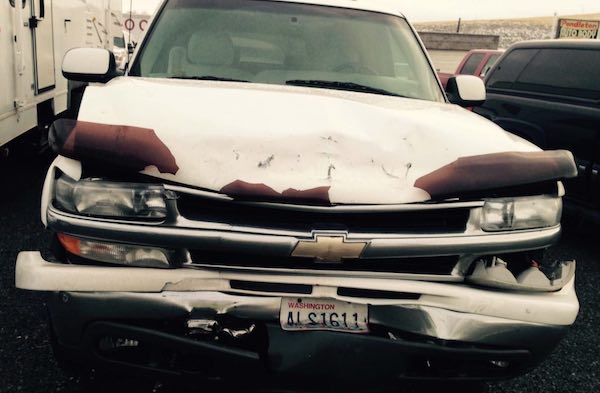 A 36-year-old woman, along with her husband and six of her children, had just enjoyed a nice Thanksgiving holiday in Idaho. But the family’s trip back home to Washington was not nearly as pleasant.

KF was seated in the front passenger seat of the family’s Chevrolet Suburban as they traveled west on Interstate 84 in Oregon. The roads were covered with snow and ice from a previous storm. With a line of slow-moving semi trucks in the right lane, KF’s husband attempted to pass the trucks.

A semi truck traveling about 15 miles per hour abruptly moved into their lane. Going about 60 mph with subpar road conditions, it was impossible for KF’s husband to slow down in time. Their Suburban rear ended the semi.

The semi truck driver was cited for a failure to yield while changing lanes. KF said it appeared the truck driver did not have adequate room to make the lane change. The family of eight was shaken up by the accident, especially KF. She was holding the bar that’s above the glove box with her right hand at the time of the collision, causing her significant injuries.

KF suffered a triangular fibrocartilage complex (TFCC) tear in the accident. This cartilage structure is often damaged when a person suffers trauma while bending the wrist backwards. Unfortunately for KF, this injury required four separate surgeries and extensive rehab.

Additionally, KF suffered seizures following her second and third surgeries, complicating her recovery process. In addition to the TFCC tear and subsequent seizures, KF also had injuries to her shoulder blades, as well as cervical and lumbar sprains in her back.

Less than two weeks after the accident in Oregon, KF’s husband contacted the trucking accident lawyers at Davis Law Group, P.S. in Seattle. With his wife in pain and the serious nature of semi-truck accidents, KF’s husband made the right decision to contact a law firm with the experience to handle such a case.

With tens of thousands of dollars in medical bills and rehabilitation costs, KF was looking to get her financial freedom back and hold the negligent parties responsible.

The settlement process was not a quick one for KF and her family. After years of back-and-forth between the two sides and KF’s continuing medical procedures, a settlement was reached, that in total exceeded $1 million.

Our attorneys successfully negotiated a settlement of $857,000 for a mother injured in a semi truck collision.