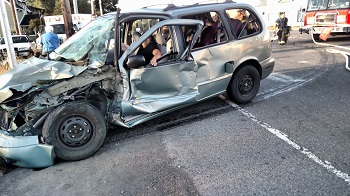 Our client, E.S., was driving her three foster children to the daycare center where she also worked as a cook when her Nissan Quest minivan was struck by a Quigg Brothers construction company dump truck at the intersection of West Reynolds Road and North Pearl Street in Centralia, WA.

E.S. and the child passengers were trapped inside the crushed vehicle.  First responders used the jaws-of-life rescue her and the children before transporting them to Providence Medical Center for emergency medical treatment.

The victim was then airlifted to Harborview Medical center where she required emergency surgery.  She suffered a fractured left arm and left leg.

Law enforcement investigation confirmed that the Quigg Bros employee that was driving the truck was at fault for the accident.

In March 2018, attorney Chris Davis of Davis Law Group in Seattle filed a lawsuit in King County Superior Court against Quigg and the at-fault driver. The settlement agreement comes just weeks before the case was set to go to trial.

Daycare worker receives a $1.8 million dollar settlement for injuries she sustained in an August 2017 accident with a Quigg Bros, Inc. dump truck in Centralia. (Case No. 201785, Insurance: Travelers)