$1.35 Million For Family in Vehicle-Into-Building Crash

Our client, Kaye, was a 60-year-old woman working as an office manager for an insurance company in Renton, Washington when a devastating car accident took her life in November 2012.

Kaye was working at her desk on an otherwise normal weekday when an elderly woman driving on a nearby road crashed through the front window of the business and landed on top of Kaye's desk. Tragically, Kaye was trapped underneath the rubble.

Firefighters had to knock down a brick wall and window in order to get to her. Medics arrived at the scene within minutes and attempted to resuscitate Kaye, but she died at the scene.

>Police investigated the storefront crash in an effort to determine what possible factors may have contributed. Investigators were eventually able to determine that the elderly driver was driving eastbound on Airport Way and had tried to make a turn southbound onto Logan Avenue.

Investigators believe the driver simply failed to properly negotiate the turn, which resulted in her crashing through the wall of the business where Kaye worked.

Kaye’s husband, Larry, and the rest of the family were understandably devastated over the loss of his wife. After months of mourning and getting no help from the at-fault driver's insurance company, Larry and his family decided it was time to start searching for an attorney to pursue a wrongful death lawsuit on Kaye's behalf.

Larry says he and his family interviewed a three personal injury law firms before they eventually decided to hire the legal team at Davis Law Group, P.S. "for a myriad of reasons." The case went to a jury trial, but both sides decided to settle the case for $1.3 million before the trial was completed. In total, we recovered a $1,350,000 settlement on behalf of Kaye and her surviving family members. 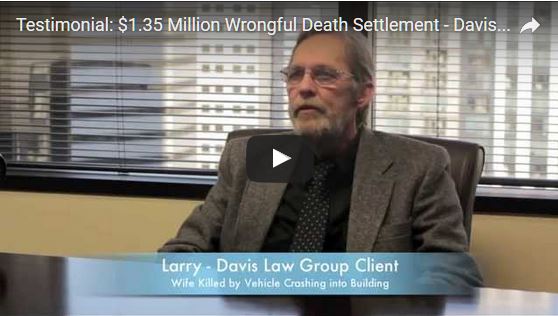 We recovered a $1,350,000 settlement on behalf of our client, Kaye, who was killed when a car crashed through a building while she was working in 2012. The case was settled during the jury trial.