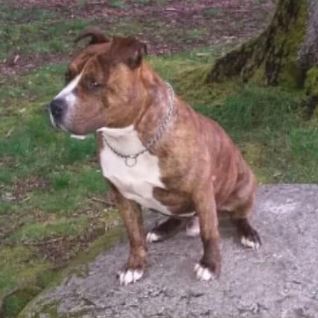 On November 6, 2019, Fredrick Coats and his 5-year old son, visited a neighborhood barbershop to get haircuts.

The shop owner owned a Pitbull dog that he allowed to be in the shop daily during business hours.

The dog had a prior history of aggressive behavior and tendencies.  The owners did not chain, leash, and/or muzzle the dog while it was in the barbershop.

While waiting for his son’s haircut to begin, Coats asked permission from the shop owner if his son could pet the defendants’ dog.  The owner answered yes and gave permission for the boy to pet the dog.

The boy’s initial interaction and contact with the dog was unremarkable and ordinary.  But when he approached the dog again, the dog viciously lunged at and attacked the young boy without warning or provocation.The dog bit the boy’s face causing him severe and graphic injuries.  The young boy did nothing to intentionally provoke or hurt the dog.  As a result of the encounter with the aggressive dog and its menacing behavior, the child severe bodily and emotional injuries and incurred significant damages.

The owners, keepers, and/or harborers of a dog are strictly liable for the injuries and damages caused to others as mandated by the dog liability statute at RCW 16.08 et seq.  The dog owners had prior actual and/or constructive knowledge that the dog had aggressive and/or dangerous propensities that were likely to lead to the injuries inflicted upon a human being, including the injuries and/or bites that their dog inflicted upon the victim.  The child suffered severe injuries to the left side of face including jawpunctures under chin; deep gashes in cheeks; wounds in mouthfront; and tooth dislocation.  Long-term scarring and muscle damage will never fully heal.  The boy endured nightmares for months.

The dog owners failed to adequately quarantine, secure, confine, and/or muzzle the dog so it could not injure another human being.
Dog owners have a duty of care and duty to act reasonably.  Defendants breached their duty of care and their duty to act reasonably by, among other things, failing to warn people on the business premises about the dog’s history of aggression and/or the dog’s dangerous tendencies.

$1.3 Million Dollar Settlement For 5-Year-Old Bitten In the Face by a Barbershop Pitbull