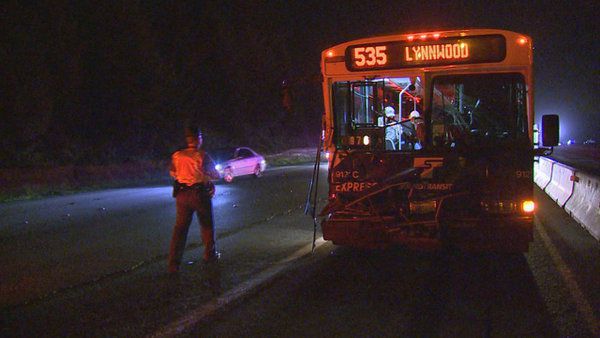 Officials with the Washington State Patrol (WSP) announced Wednesday that the driver of a Sound Transit bus failed to stop for a red light and subsequently was primarily responsible for causing a collision in Kirkland last year that killed two people and injured another.

Aleksandr Rukhlin was the driver of the Sound Transit route 535 bus – which travels regularly between Lynnwood and Bellevue via Interstate 405 – on May 6, 2013 that crashed into an SUV carrying Elizabeth and Robert Rotta, as well as their 51-year-old son, Kendall Rotta.

“Driver Aleksandr Rukhlin was northbound I-405 exiting the transit ramp to NE 128th Street with 25 passengers aboard,” reads the news release issued by Washington State Patrol. “WSP’s Major Accident Investigation Team (MAIT) investigation revealed Rukhlin slowed from the highway speed of 60 mph to approximately 45 mph as the bus exited the highway.  Rukhlin did not noticeably slow down as he traveled up the exit ramp before entering the intersection and striking an SUV at approximately 45 mph.”

The release also paints a clearer picture of how scary and traumatizing it was for the passengers who were on board after the bus accident occurred.

“Passengers on the bus reported yelling at the driver to stop the bus, but Rukhlin continued through the collision and back onto northbound I-405,” the statement said. “The bus travelled nearly three-quarters of a mile before passengers were able to intervene and assist in getting the bus stopped. It took one minute and 13 seconds for the bus to come to a complete stop after the collision occurred.”

Investigators also confirmed what Kendall Rotta told police following the collision; that he had the right of way and was traveling at a safe speed when the crash occurred.

“The driver of the SUV, Kendall Rotta, was accelerating on 128th Street as his traffic light was green.  Rotta reached a speed of 23 mph before being struck by the bus. Rotta suffered a concussion and a fractured rib as a result of the collision. The other two passengers in Rotta’s vehicle, Robert Rotta and Elizabeth Rotta, are deceased as a result of blunt force trauma.”

In addition to confirming the details of exactly what caused the deadly bus collision, WSP’s investigators recommended that the King County Prosecutor consider filing a number of criminal charges against Rukhlin.

From the official statement:

Detectives determined that neither vehicle, nor environmental factors, contributed to the cause of the crash.  MAIT has asked the King County Prosecutor to consider charges of:

This story will continue to be updated as new information about the collision and any resulting criminal charges are available to the public.