1 Killed, 3 Injured in Wrong-Way DUI Crash on I-5 in Arlington 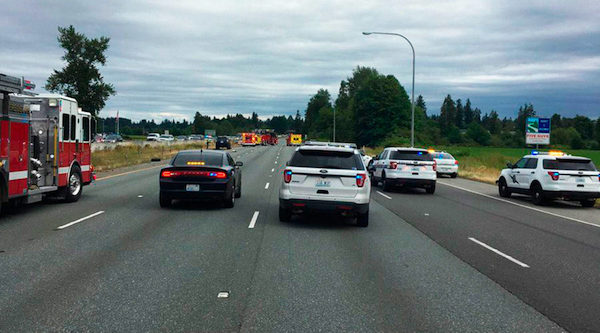 A woman was killed and three others were injured Sunday when a suspected DUI driver going the wrong way on Interstate 5 in Arlington slammed head-on into another car, according to the Washington State Police.

A 28-year-old Oregon woman was killed. She was a front seat passenger in a Toyota Corolla that was hit by the wrong-way driver. The driver of the Corolla, a 30-year-old Oregon woman, and a baby in the back seat were taken to Providence Regional Medical Center Everett. KOMO reports they have since been released.

The wrong-way driver is a 56-year-old Darrington man. He has a history of DUI. He was treated for his injuries, then booked into Snohomish County Jail on suspicion of vehicular homicide, driving a vehicle without an ignition interlock device and driving with an invalid license.

A police investigation found that the wrong-way driver entered I-5 via exit 202 and drove six miles in the wrong direction in a Ford Explorer before hitting the Corolla.

Three other vehicles were hit by debris from the crash.

KOMO spoke with a woman that was driving home to Lynnwood in another vehicle when she was forced to swerve out of the way of the wrong-way driver.

“My life just flashed before my eyes,” the woman said. “He had to have been going like 90 miles per hour.”

Has a Wrong-way Driver Impacted You?

The fact of the matter is, if you have been the victim of a wrong-way auto collision, the results can include devastating injuries and significant property damage. This can be a very scary time for injury victims and their families.

At the office of Davis Law Group, P.S., our legal team will aggressively investigate and litigate the incident and fight to obtain the best settlement possible for you. Contact our Seattle office today for a free, no obligation case evaluation.