Woman injured in crash with dump truck on I-5 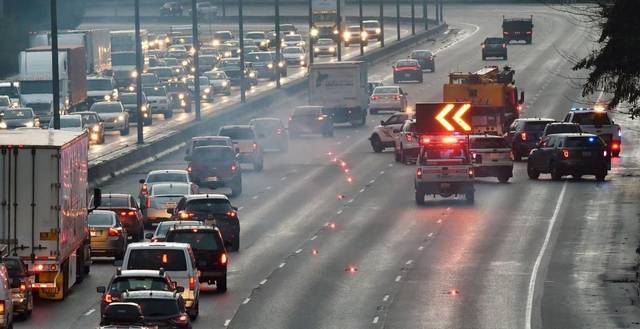 A woman from Tumwater was injured Wednesday morning after a dump truck changed lanes and slammed into her vehicle on Interstate 5. She lost control of her car, which was then hit by a truck and a mobile crane before coming to a stop. The accident occurred near milepost 107.

According to troopers with the Washington State Patrol, the dump truck did not stop at the scene of the truck accident. It has been described as a light blue truck with the word “Rinkle” on it. It was last seen heading east on 29th Avenue SE in Olympia. Investigators are not yet certain whether the driver of the dump truck will face criminal charges for a hit-and-run; in cases involving large trucks, drivers are sometimes unaware that they were even involved in an accident.

"These rigs are so big, maybe they didn't feel it or realize they hit something with their trailer," Trooper T. Bartolac told reporters.

The driver of the mobile crane, a 54-year-old man from Rochester, stopped at the scene of the accident and cooperated with police. He was not injured in the collision.

The woman whose car was struck is recovering in Providence St. Peter Hospital in Olympia. She sustained a serious head injury in the crash and is currently listed in fair condition. A 1-year-old boy who was in her car at the time of the collision was not injured.

After the accident, traffic was backed up on Interstate 5 for nearly 3 hours during the morning rush hour. Three lanes were closed while investigators examined the scene of the crash and cleared debris from the road. Highway 101 also experienced backups near the scene of the collision.

Anyone who witnessed the accident, or who might be able to identify the dump truck, should call 911.

Does the injured victim have any legal recourse?

While committing a hit-and-run is a crime, drivers may not face criminal charges if they were not aware that they caused an accident, and thus drove away from the scene without realized that they should have stopped.

Even if investigators find the driver of the dump truck and choose not to charge him or her with a felony hit-and-run, the injured victim may be able to file an insurance claim in civil court. Since the truck involved in this crash is a commercial vehicle, the company that owns and operates it may have additional liability insurance that could cover an injured victim’s medical bills, time off work, and other expenses.

If you have been injured in an accident involving a commercial vehicle, it’s a good idea to speak with an experienced personal injury attorney as soon as possible.