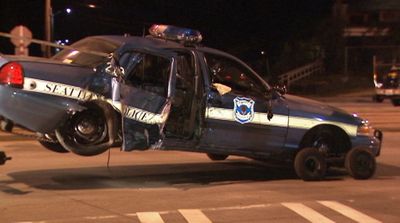 A woman in her 30s was injured in a pedestrian accident with a police vehicle late Friday evening in South Seattle.

According to police, an officer was traveling southbound on Martin Luther King Jr. Way South in a fully-marked patrol vehicle with the emergency lights and sirens activated just before midnight Friday, as he was responding to a disturbance call. A woman was crossing MLK Jr. Way South near South Willow Street at the time and was struck by the officer’s car as she crossed.

Police say that following the pedestrian collision in Seattle, the officer lost control of his vehicle and crashed into a light pole on the south side of the intersection. Emergency crews responded to the scene immediately, and the woman was taken to Harborview Medical Center to be treated for non-life threatening injuries. The officer was also taken to the hospital as a precaution.

If you have been injured in a pedestrian accident, you may be entitled to compensation for your injuries and lost wages.