Will the Alaskan Way Viaduct Closure Lead to Fewer Accidents? 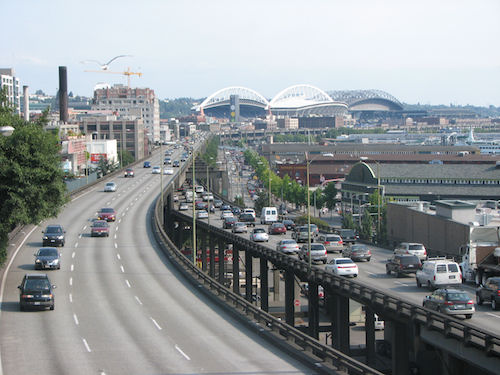 On January 11, 2019, the Alaskan Way Viaduct will permanently close. Three weeks later, the new State Route 99 waterfront tunnel will open. During the three weeks with no traffic on SR 99 through downtown, there will be significant impacts for commuters and those traveling through the city.

But the bigger impact may be felt in the years and decades to come.

History of the Viaduct

The 2.1-mile viaduct opened on April 4, 1953. It features a double-decked elevated section of SR 99 that runs along the Elliott Bay waterfront in the industrial district and downtown.

Heading north on SR 99, the viaduct begins about a mile north of the First Avenue South Bridge, Just south of Safeco Field, the bridge turns into its trademark double-deck alignment, with northbound traffic on the upper deck and southbound traffic on the lower deck. At Pike Street, the bridge goes back to a side-by-side alignment for about a half-mile until the viaduct's north end at the entrance to the Battery Street Tunnel.

The viaduct has been analyzed over the years and has significant earthquake concerns. Its instability is one of the major reasons why it is being replaced by a tunnel.

Accident History on the Viaduct

In the viaduct’s history, there have been many instances of an accident creating a hazard on the streets below. Although the elevated highway does have guard rails, numerous crashes have required major emergency responses and traffic-crunching street closures after large vehicles spilled their loads or tipped over on the viaduct.

The following is a list of major car accidents or incidents on the viaduct over the years:

Is a Tunnel Safer for Drivers?

The Alaskan Way Viaduct demolition and opening of a 1.7-mile tunnel running beneath downtown Seattle will be a big change for the City of Seattle. Opinions range on the convenience of the tunnel, as downtown exits are being removed from SR 99 and new tolling rates eventually going into effect.

There is already a small stretch of tunnel on SR 99 (Battery Street tunnel). That tunnel will eventually be closed, and a new one opened.

But what about traffic safety in the new, extended tunnel?

The National Transportation Safety Board draws attention to some of the hazards associated with driving through a tunnel. Aside from tunnel collapse (extremely unlikely), crashes usually take place in tunnels because of poor visibility. Others feel claustrophobic while driving through tunnels.

The new tunnel has been completed for months. During this time, transportation departments have done extensive testing to make sure the tunnel is ready in case of disaster.

In September, a drill was conducted involving eight wrecked cars retrieved from junk yards, and some posed on their sides. The cars were mixed up with three buses in the simulated accident along with dozens of people simulating various levels of injury to try to give the feel of a real emergency inside the tunnel.

The drill involved the release of artificial smoke which was quickly drawn out of the tunnel’s side vents. It also involved the setting off of the “deluge” sprinkler system designed to automatically drown a fire or hold a major fire in check.

A Hope for Fewer Accidents

Seattle-based personal injury lawyers at Davis Law Group hopes that the closure of the Alaskan Way Viaduct results in fewer accidents. It's impossible to eliminate all accidents, but safety measures and road designs can go a long way toward cutting down on wrecks.

If you or a family member has been injured in an accident in Seattle or Washington state, contact us today at (206) 727-4000.