When you Google Rainier Avenue South you get three bad results:

These Google results are the tip of the iceberg for some people, according to this excellent article by Henry Rosoff, who live and have to travel often on Rainier Avenue South, a street that sees an average of one crash a day. That's why there's little hyperbole in what these activists are calling "Seattle's most dangerous street."

The tipping point for many came last summer when, within a three month timeframe, a car plowed into a Columbia City salon and a pickup hit crashed into a police car, city bus, and thirteen other vehicles. Seattle Department of Transportation vowed to solve the problem of Rainier Avenue South. Activists say there's been little movement toward solutions to the threat of deadly car accidents, and given the statistics on this street later will cost a lot more money than sooner would.

Seattle councilmember Bruce Harrell came to a rally these citizen were holding Wednesday night. At the rally a man dressed in a chicken suit danced to direct driver's attention toward the cause but not away from the road. He Promised the Department of Transportation would begin tending to the avenue's traffic light situation by winter. 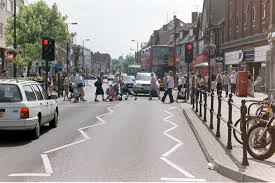 What's The Cause Of Rainier Avenue Accidents?

Each wreck is unique (talk to a lawyer if you're looking for what to do next) but street design and maintenance could be contributing factors. The American Journal of Public Health studied injury rates at Montreal intersection over 5 years and found a correlation between average income in an area and the number of injuries in that area (even adjusting for disproportionate rates of vehicle and foot traffic).

If you've been injured in an accident on Rainier Avenue South, call the top-rated personal injury lawyers at Davis Law Group to learn more about your legal rights or to request a free consultation.