Who Should Be Held Responsible for I-5 Skagit River Bridge Collapse?

After last night’s Skagit River Bridge collapse, several questions around the news media are concerning who is liable for such an event. Should the Washington State Department of Transportation be responsible for not maintaining the bridge properly or posting adequate warning signs for the bridges clearance? Should Mullen Trucking be responsible for hitting the spans which allegedly caused the Skagit River Bridge to collapse? Should the escort company be sued for not properly warning the Mullen truck about the clearance issues?

According to the Washington State DOT spokesman, Dave Chesson, the Skagit River Bridge was 1,112 feet long and 180 feet wide with two lanes for travel in each direction. There were four spans over the water supported by piers with a vertical clearance on the overhead supports of 14.6 feet. The span on the north side collapsed after the Mullen Truck allegedly struck several trusses on the north end of the bridge with the top right front corner of the load.

Washington State law requires oversize loads to have an escort vehicle with a vertical measuring pole any time the height of a vehicle is more than 14 feet, 6 inches. Mullen Trucking complied with this law and hired a local escort vehicle with a vertical measuring pole to detect if the truck will make the clearance.  According to witnesses, the vertical measuring pole allegedly hit the bridge but did not signal the truck to stop traveling. The tractor-trailer carrying an oversize load then hit the upper part of the span.  Furthermore, the Mullen Trucking said it received a state-issued permit to carry its oversized load across the bridge.

However, according to witnesses traveling behind the tractor trailer, the load appeared to be about four feet too wide to fit through the bridges superstructure. Another tractor-trailer was traveling in the left lane, which did not allow the Mullen Truck to merge into the left lane. Should of the driver of the truck slowed down and in order to cross the bridge in both lanes? Should of the escort vehicle warn the truck about the width and height issues with crossing the bridge?

Additionally, near the Skagit River Bridge, vehicles can exit at Cook road, travel South on SR-9, then take E College Way back to I5. This route completely bypasses the Skagit River Bridge. Was Mullen Trucking or the escort company responsible for planning the route of traveling from the border to Vancouver, WA? These are all questions that injured parties should have address in order to establish liability for this tragic event. 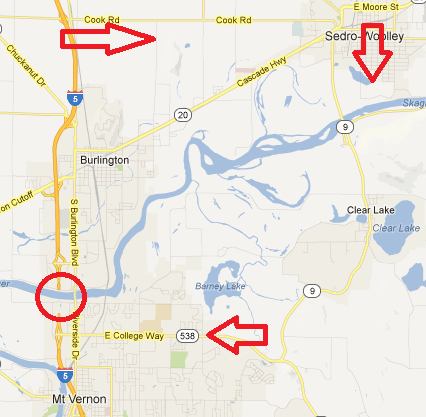 Questions the injury victims may have for the trucking/local escort company?