Investigating the KOMO Helicopter Crash: Who Is Legally Responsible?

Who Should Be Held Accountable For The KOMO Helicopter Crash In Seattle? 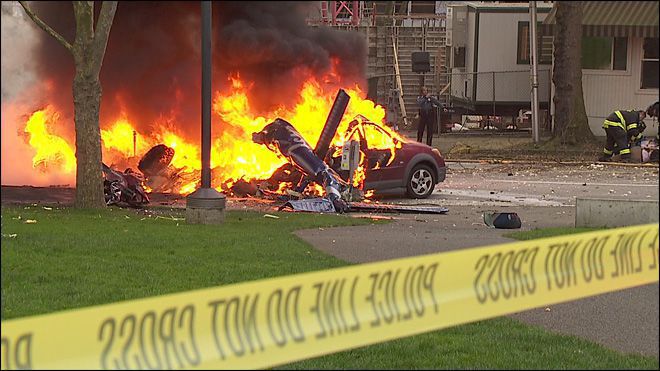 The entire City of Seattle, surrounding communities and people across the country are in complete shock over the tragic helicopter crash that killed the pilot and a TV cameraman near the iconic Space Needle.  The accident also caused serious, life-threatening injuries to several motorists who were struck by the helicopter debris and engulfed in flames following the subsequent explosion.

Whenever this kind of tragic accident happens the general public as well as the family and friends of those who were injured or killed want answers.   They want to hold the responsible parties accountable and they want to do whatever is necessary to prevent similar accidents in the future.  People are asking themselves questions like:

Can The Victims of The Helicopter Accident Sue KOMO TV?

It may be weeks or months before examiners from the Federal Aviation Association (FAA) and National Transportation Safety Board (NTSB) complete their investigation and release their findings.  While the entire community waits for the results we can only speculate as to the probable causes and potential parties responsible.  Here are just a few of the possibilities.

Helicopters, Inc.  – As the owner/operator of the aircraft and the employer of its pilot, Helicopters, Inc. could be held legally responsible if either pilot-error or aircraft maintenance issues are determined to be the cause of the accident.

If Helicopters, Inc. contracts with a third-party for aircraft maintenance and service then that company may be held accountable in any potential legal action.

Hines – If FAA and/or NTSB investigations conclude that an obstruction or condition on the helipad or surrounding roof structure somehow interfered with the helicopter’s ability to take off, then the building’s owner and/or whatever company they may contract to maintain the area could be held legally responsible for the accident.

Constrution Company / Crane Operator - There has been some speculation that the helicopter may have inadvertently struck a nearby construction crane.  If it were found that the construction crane did not fully comply with all local safety and proximity restrictions and that their failure caused the helicopter accident then those companies could be legally responsible for the accident and all damages caused as a result of their non-compliance of those regulations.

KOMO / Sinclair Broadcasting – It is relatively unlikely that KOMO and/or its parent company Sinclair Broadcasting are somehow responsible for the crash. The helicopter was owned and operated by Helicopters, Inc., not KOMO/Sinclair. The pilot was an employee of Helicopters, Inc., not KOMO/Sinclair. Fisher Plaza, the building complex where KOMO is located, is owned by the global real-estate company Hines therefore KOMO/Sinclair most likely did not have any responsibility for the maintenance of helipad itself.

There are a number of other probable causes of the crash.  Literally hundreds of questions must be asked and answered in order fully understand the reasons for the crash and to determine who is legally responsible for the harms and losses of the victims and their families.