How did 3,200 Washington prisoners get released too early?

You’ve probably heard the news about the computer glitch that caused an estimated 3,200 inmates in Washington State to be released early from prison. But what exactly happened to cause the glitch, and what were the consequences of the mistake?

Why did the glitch happen? 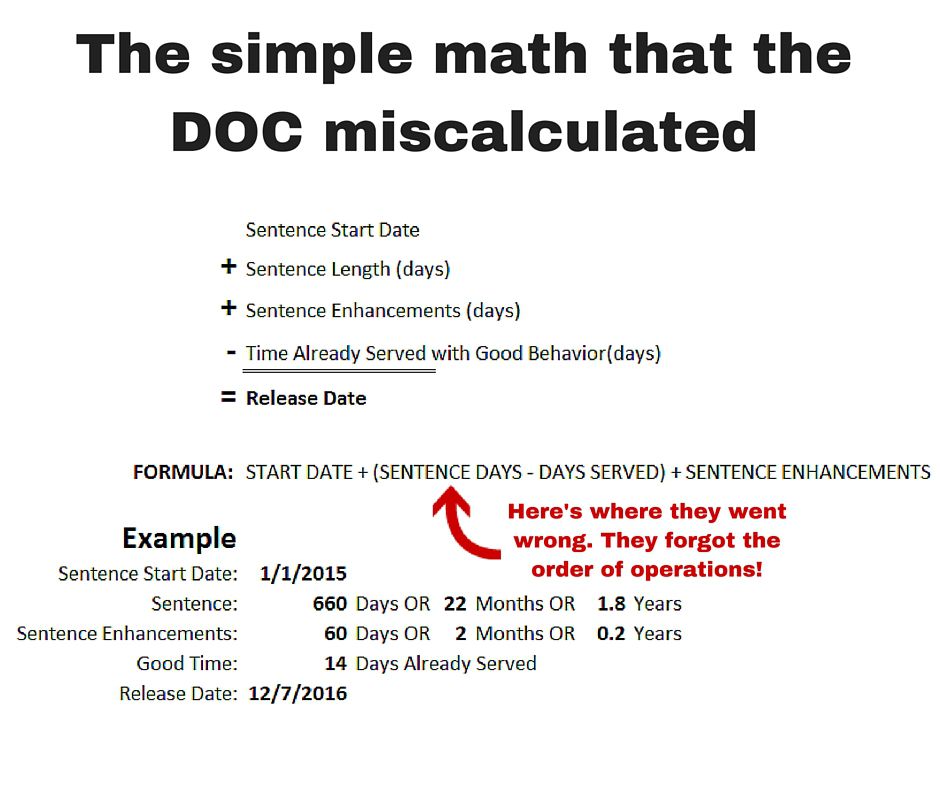 This means that prisoners who were carrying a firearm while committing another crime benefitted from the glitch. According to the Department of Corrections, “The calculation for earned time varies on a number of factors including, when the offender was sentenced, the type of crime and, for offenders serving for multiple crimes, on which crime they are currently serving their time, to name a few. In the most basic case, an offender who is demonstrating good behavior and participating in programs can earn a maximum reduction of 33.3 percent of his/her sentence in earned release time.”

What is a sentencing enhancement?

Under Washington State law, additional prison time is given if crimes are committed under certain conditions. If an offender or accomplice in certain crimes was armed with a firearm, an additional sentencing enhancement must be added to the total period of confinement (that’s jail or prison time) for all offenses.

How long did the department know about the glitch?

The problem was only announced by Governor Jay Inslee on December 22, 2015. According to the state, the problem began in July 2002, when the Washington Supreme Court ruled that “good time” credit earned in jail had to be applied to state prison sentences. When the Washington State Department of Corrections changed their computer code to recalculate the sentences of inmates, offenders who had sentencing enhancements received more credit than they should have. An estimated 3,200 offenders were released early as a result of this incorrect calculation.

According to documents from the DOC, no one made them aware of this error until 2012, when the family of a crime victim realized that the responsible offender was being released before serving his sentence. But though they had years to fix the problem, the state said that the "coding fix was repeatedly delayed." The Department of Corrections also did not notify other government entities about the problem in a timely manner; the Governor’s executive team says that they weren’t told about the issue until last week, and the chief information officer for the Department of Corrections, only attempted to notify DOC leaders earlier in December 2015.

Recently released emails show employees of the DOC discussing the glitch in 2012, but no effort appears to have been made to fix the problem on a systematic level.

How widespread is the damage?

A preliminary analysis indicated that up to three percent of offenders may have been released early in the course of the 13 years that the Department of Corrections had the faulty code. Three percent (3%) may seem like a small figure at first, but keep in mind that the total number of mistakenly-released prisoners thus far is estimated to be at least 3,200.

According to the Governor’s Office, the median number of days that offenders were released early was 49 days. This could be classified as another somewhat misleading statistic, because the longest case that the Governor’s Office is aware of involved a prisoner being let out 600 days ahead of schedule.

Two prisoners mistakenly released early have now been charged in killings that took place during times that they should still have been in prison. Since approximately 10 percent of all inmates who are released from prison commit a new offense within the first year of their release, there is a high probability that more criminals who should have been locked up with be discovered. The state is making an effort to round up those who still have time to serve. Jeremiah Smith, Robert Jackson, and Daniel Morris are all known to have committed new crimes while out of prison as a result of the glitch.

1 Comments
Ill tell you, when ever the government (the state) finds a mistake that honest, TAX PAYING, citizens are even suspected of making a mistake, all hell breaks loose in the form of penalties, fines,interest and other "fees" come into play. Whether you agree with it or not, the state, the government, the "transfer you to another department " finger-pointing begins and sometimes won't end till you prove your own innocence. Now the shoe's on the other foot big time. I don't see anyone stepping up to take the blame. It shouldn't fall on one or two. Blood is on many hands. Didn't we vote an agency accountability, double check, we can do no wrong measure into law? Or was that just a money accounting, not people I accounting issue?
by Rick Phillips February 1, 2016 at 07:06 AM
Post a Comment