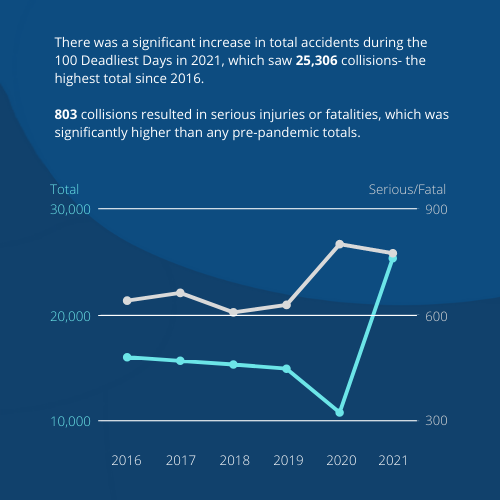 Labor day may have marked the unofficial end of summer, but it was the official end of this year’s 100 Deadliest Days, which opened the door to uncovering what a world attempting to return to normal means for drivers.

The 100 Deadliest Days title comes from the phenomenon of increased serious and fatal accident numbers typically seen during the summer months as a result of several factors including outdoor recreation, summer break for students, and heavy drinking holidays such as Memorial Day, Independence Day and Labor Day.

This year, the research team at Davis Law Group tracked collision data as it came in through the months in order to compare it to previous years and better understand the trends and shifts that are coming from our seemingly not-quite-post-covid world.

While previous years data would show a relatively steady trend of total collisions and serious or fatal collisions from 2016-2019, 2020’s data showed a sharp change due to the coronavirus pandemic with far fewer accidents in total, but an equally as sharp rise in serious or fatal accidents that was concentrated more outside of the most populous counties.

Now that 2021's deadliest days have concluded, an initial review of this year's collision data shows a startling rise in one statistic that could lead to deceptive results in others.

After the data for the 100 Deadliest Days in 2020 showed an increase in serious or fatal collisions but a decrease in the total number, 2021’s data appeared to have three distinct possibilities.

One school of thought was that the return to normal would result in data more aligned with the pre-2020 trend. Another was that reopening would release pent-up desire to venture out. Alternatively, the data could lie somewhere in between.

After review, it appears that this year's collision data does appear to fall between trend lines, though in a rather unfortunate way. While 2021 saw 803 serious or fatal collisions to the previous years 831, around a 3% decline, the total number of accidents spiked harshly from 10,774 to 25,306 (a 250% increase), the largest total of the years studied.

The odd phenomenon of total accidents spiking so dramatically paired with a reduction, however small, in serious or fatal collisions is only made possible by the outlier of a year like we had in 2020 and could lead to some misleading figures.

One useful statistic to review when examining collision data is the incidence rate of serious collisions, or simply put, the percentage of the total collisions that resulted in serious injury or death.

This figure can be useful in getting a snapshot of just how safe our roads may or may not be when compared with previous years or other areas, but it can also be misleading.

The coronavirus pandemic brought a sharp spike in incidence rate, going from 4.3% in 2019 to 7.7% in 2020. But the drastic increase in total collisions during 2021’s deadliest days resulted in a significantly lower incidence rate this year of just 3.2%.

This partial snapshot of data could be used to point to roads being safer in 2021 despite it coming as a result of more accidents occurring within the time period.

What This Data Means For Drivers In Washington 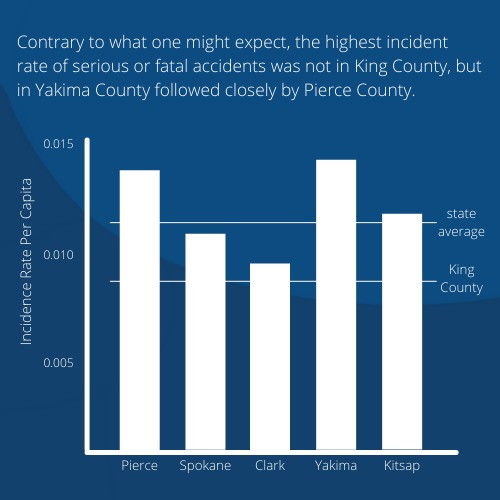 Statewide statistics and totals are interesting, but as we’ve shown, sometimes only tell part of the story. That’s why we examined numbers county by county to find which areas had a higher share of serious or fatal collisions per capita.

The four most populated counties, King, Pierce Snohomish, and Spokane account for nearly 60% of the state's total population. During the 100 Deadliest Days in 2021, they accounted for 54% of serious and fatal accidents.

Last year these same four counties accounted for roughly 47% of the total, meaning that less densely populated counties faced nearly half of the state's total serious collisions, despite housing only around 40% of the state’s population.

Conclusions Based On 2021 Data 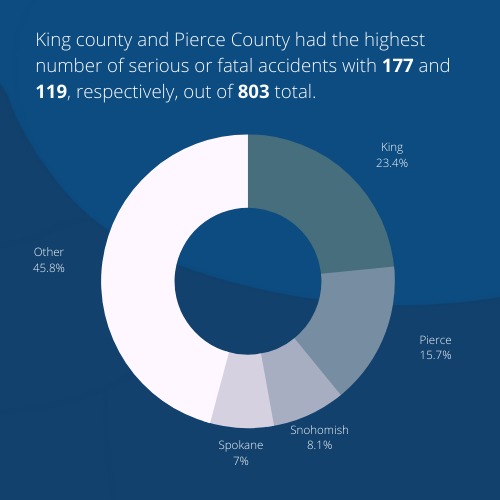 The fact that the deficit shrank between the less populated counties from 2020 to 2021 shows the attempt to return to normal and the effect the pandemic was still having on our states' more rural counties. While the rate of serious and fatal accidents did decrease this year, the evidence would suggest that many people were still looking to escape to outdoor recreation, as pandemic restrictions came and went repeatedly this summer.

Some counties saw significant increases in total collisions including Pacific, Walla Walla, Pend Oreille and Asotin, all with 2 to 3 times as many as the year before while others like Douglas, Okanogan, Clallam and Skamania actually saw a reduction of anywhere from 63% to 73%.

The coming months will bring even more challenges to drivers as we continue to explore the best options to reopen safely in an ever-changing landscape of guidelines and restrictions. Hopefully, the end of the summer months and a reduction in outdoor recreational activities will bring with it a reduction in serious collisions and some much-needed rest for first responders and caregivers in Washington after another hectic year for serious injuries and illnesses.