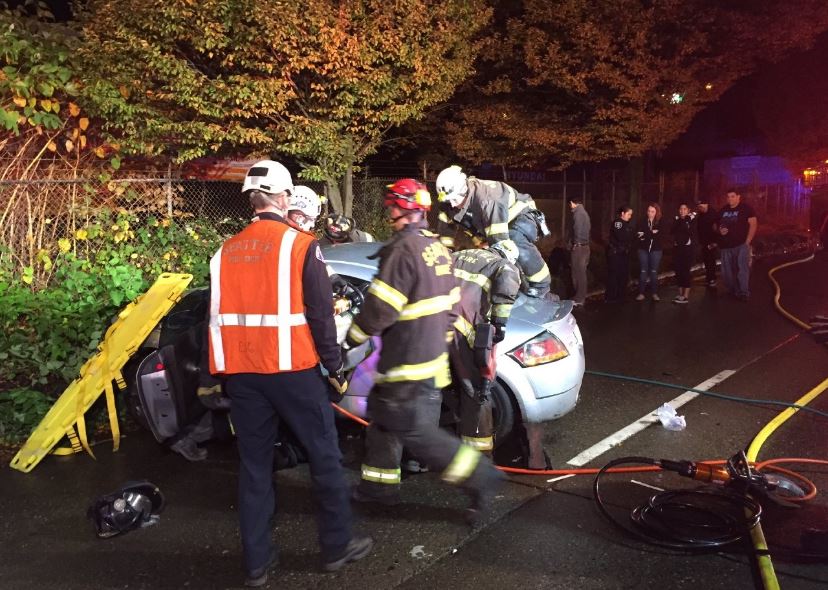 Emergency responders at the scene of the car crash. Image source: KOMO News

Witnesses at the scene of a crash on Monday night stated that two cars were traveling at high speed on West Marginal Way when the driver of a silver Audi lost control, forcing another car off the road. "They were both racing and then next thing you know, like we saw him just do a spin out. I didn't even know there was another car involved until we pulled up and really looked, and her car was smoking," one witness told reporters.

One of the involved drivers left the scene before police arrived. A person who was extricated from the other crashed car was transported two Harborview Medical Center with serious injuries. Two other people also suffered injuries, although theirs were not life-threatening.

In addition to the reported injuries, the crash damaged some nearby power lines.

Police closed the road for several hours so that investigators could look into the circumstances of the accident. The driver of the silver Audi was later arrested after being released from the hospital. He has been booked into King County Jail for investigation of vehicular assault.

Street racing is still a serious problem in the Seattle area

In Kent and other cities around the Seattle area, long flat stretches of road have proved irresistible to street racers. Police are struggling to deal with the problem; with limits on how they can safely find and chase racers, even if they know when and where races might take place, it can be difficult to stop a race that’s already in progress.

Seattle’s narrow streets, tall hills, and sharp turns make it hard to get up to racing speeds in most of the city. But that doesn’t mean that racing is never a problem within Seattle’s city limits.

If you have been injured in an accident with another driver and you suspect that street racing was to blame for the crash, it’s a good idea to get in touch with a personal injury attorney as soon as possible.

While street racers who cause injuries or death are likely to face penalties in criminal court, a personal injury attorney can help you understand your civil rights as an injured victim. Call Davis Law Group in Seattle at (206) 727-4000 or use the confidential contact form on this page to get started.