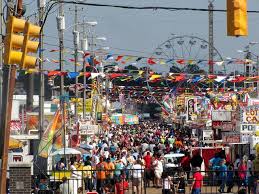 Parents across Washington state can breathe a little easier after officials with the Washington State Fair announced that they stepped up the security for evaluating all potential employees this year.

According to KOMO News, Funtastic Shows, Inc. is the third-party contract company responsible for operating all games, rides and other attractions at the Washington State Fair. Last year, Funtastic fell under intense scrutiny after it was revealed that three of its seasonal employees were registered sex offenders.

According to company officials, the three employees who made it through the employment process for the 2013 fair had allegedly lied on their applications. That prompted the company to ramp up security measures for evaluating all potential employees for 2014.

“I have not heard of anyone (being rejected this year), so it looks like everything has gone through clearly so we’re in good shape,” said Karen LaFlame, an official for the fair.

Companies similar to Funtastic across the region are being extra diligent after last year’s incident at the Washington State Fair, which was followed by the arrest of a registered sex offender who police discovered was working at the Pacific County Fair this summer. Funtastic Shows, Inc. is reportedly not the company responsible for operating rides and games at that fair, according to KOMO News.

Currently, no state or federal law requires carnivals or fairs to run criminal background checks on their workers. That means that hundreds of fair employees who are regularly in contact with children of all ages could potentially be sex offenders or violent criminals.

But Washington state lawmakers now say they will be joining in on attempts to improve security and reduce the likelihood of sexual predators posing a threat to children who attend these fairs.

Legislation that would require all ride operators at these types of events to undergo thorough background checks is expected to be introduced in the near future.