This Happens 20 Times Daily, and It Happened in Fremont on Wednesday 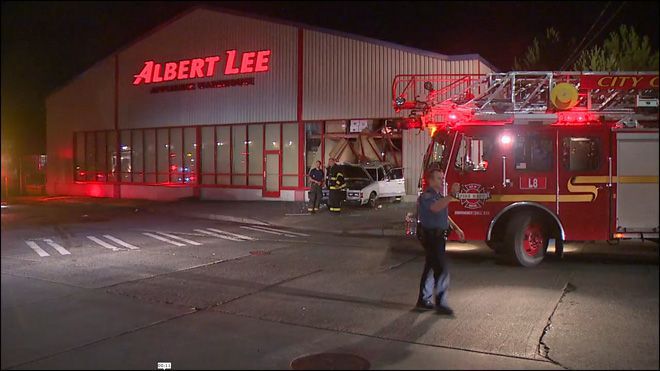 On Wednesday afternoon, Seattle police say a white car backed into an Albert Lee Appliance Store in Fremont, sending one individual to the hospital with serious injuries.

According to academics who conducted a large-scale analysis of media reports about this subtype of car accidents, cars crash into buildings roughly 20 times a day in the U.S. It seems hard to believe, but you will always find these stories in the background of news sites.

As a point of reference, here are some notable news articles involving recent vehicle-into-building collisions around the country:

These sorts of crashes happen all the time, but they seem pretty invisible to the public. There are a few factors contributing to this. A lack of central authority dealing specifically with these sorts of incidents helps hide them.

The National Transportation Safety Board fails to record substantial information specifically for vehicle-into-building collisions. It should be noted that the research team which estimates there to be approximately 20 of these vehicle-into-building crashes each day resorted to scouring newspapers and legal filings to capture an accurate understanding of where crashed cars are ending up.

The other factor hiding this breed of accident is that most of them happen to convenience stores. Of the twenty crashes that happen a day, the research group found that at least one of them involves a 7-11.

It’s an industry specific problem that has yet to be addressed, and could easily be fixed with one of a variety of measures, e.g. angled parking or parking bollards.

If you’ve been injured by a careless driver who crashed into a store you where you were shopping, it may be in your best interest to contact a personal injury attorney with experience in that area of law. Exploring your legal options might help you recover pay you missed out on work or job interviews.