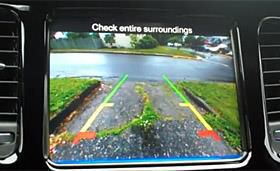 When automotive manufacturers across the world began airing television commercials that showed off the benefits offered by backup cameras just a few years ago, it became obvious that this was the next big thing in technology innovation to change the way Americans drive.

What Attorneys Say About About Backup Cameras & Child Backover Deaths

As a parent and personal injury attorney, the first thing I thought of when I saw the introduction of this innovative technology is the devastating and needless tragedies that can be prevented by allowing a driver to see everything behind them without awkwardly turning around and being blinded by anything that may be in the way.

So naturally, I was thrilled when the Insurance Institute for Highway Safety (IIHS) released the results of a comprehensive study about the pros and cons of backup cameras last month, which found that backup cameras are more effective than radar-based parking sensors at helping drivers avoid backing up into a pedestrian or fixed object.

When I saw this report, I wasn’t thrilled just because the IIHS confirmed what I had already thought – it seems fairly logical that an actual live-feed coming from a camera on the back of the vehicle would be better at preventing backup accidents than a sensor that simply uses radar and makes a beeping noise to alert the driver when a person or object is in the vicinity of the vehicle.

Actually, I was thrilled because I have believed ever since backup cameras first became popular that they should be a standard feature on all vehicles in the U.S., and that the benefits of implementing this technology and actually making them mandatory far outweigh the costs.

How Backup Cameras Can Make a World of Difference

According to ConsumerReports.org, nearly 300 people are killed and another 18,000 reportedly suffer significant injuries as a result of ‘back-over collisions’ each year in the U.S., meaning a vehicle is backing up and hits something that the driver does not see or cannot react to in enough time.

And since the victims of back-over accidents are children in a significant percentage of cases, people everywhere should have no trouble agreeing on the benefits of backup cameras. No child should ever be injured as a result of someone else’s negligence, and nobody wants to bear the guilt associated with negligently causing injury to a child – it works both ways.

So to recap, nearly 300 deaths and 18,000 injuries – approximately one-third of which are attributed to children – could potentially be avoided by the implementation of a piece of technology that the NHTSA says costs about $140 per unit.

Last year, the NHTSA issued a recommendation for automotive manufacturers in the U.S. to implement backup cameras in all new vehicles, but the government agency stopped short of making it a requirement.

Thankfully, the administration reviewed its decision and decided on March 31 to implement a mandate that requires most new cars, SUVs and minivans in the country to have backup cameras installed by the year 2018. The mandate will also apply to some small trucks and buses, according to the NHTSA’s statement.

And while many people applaud the administration for its decision to require this life-saving technology in most vehicles nationwide, a number of those who represent safety advocacy groups are only disappointed that the decision took as long as it did.

“While the administration delayed the rule, more children died in backover accidents,” said Robert Weissman, President of safety advocacy group Public Citizen. “The cost of regulatory delay, in human lives, could hardly be more clear than it is today.”

If you have been injured in a car accident, contact Davis Law Group.