Komo News is reporting a tragic story: Harborview Medical Center has pronounced a woman dead this morning after her car collided head-on with a tour bus on Vashon Island. The crash occured around 11:30 am. The woman was of college age. Witnesses tried and failed to free her from the wreckage of her car. They stated that they believed her death was caused by a blunt strike to her head during the collision. The tour bus was transporting many children. It seems none of these young people were seriously injured.

The cause of the collision is unclear, though some unnamed sources claim that the bus driver might have experienced some sort of medical episode. Again this is just witness conjecture.

The Davis Law Group is particularly sensitive to deaths related to bus accidents, having recently filed a wrongful death lawsuit against First Transit Inc. and its employed driver on behalf of Robert and Elizabeth Rotta and their adult son. Negligence and recklessness are unacceptable when trusting so many lives to a single operator. 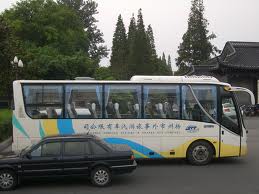 Bus crashes like these, unfortunately, are not rare. According to research conducted by the University of Michigan's Transportation Research Institute, on average a person dies every day from bus collisions. 14,000 of these collision result in injury.

The institute concludes that tour buses have the highest chance of all buses of driver error. The Journal of Safety Research has crunched the numbers and insists that, in terms of aggregate miles traveled, bus travel is almost as dangerous as car travel and over 33,000 people died in car accidents in 2012.

Unsurprisingly, the Journal continues, the bus drivers most likely to cause a collision were either very new to their job, or over 65 years old. This is a standard bell curve distribution of skill. However these accidents seem to happen to drivers exhibiting certain behaviors. It would seem logical that the owners of the buses could step in and institute some prevention measures to catch these drivers before they become collision statistics.