What Happens If A Concussion Is Untreated?

It’s a given that teens who participate in sports – such as football, soccer, baseball, gymnastics and plenty more – are at a much higher risk of suffering a concussion that those who are less active. But recent data from a major research group regarding the epidemic of untreated concussions emphasizes the importance of ensuring that young people who suffer a concussion or other form of traumatic brain injury receive treatment as soon as possible. 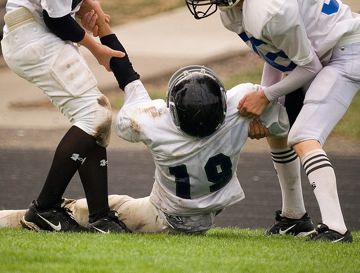 According to neurologist Frederick Nahm, who currently serves as head of the Stroke Center at Greenwich Hospital in Connecticut, teens with untreated concussions are at much higher risk of developing permanent brain injuries and mental disorders including anxiety and depression.

“These secondary complications, like anxiety disorders or a new phobia of tests, memory problems, depression, apathy, inattention and other behaviors are indelible and can be difficult to treat,” Nahm said. “It’s not something the student can control or work harder to ‘fix’ because it’s the result of an injured brain.”

Concussions are medically classified as a form of minor traumatic brain injury (TBI), and the severity of concussions can vary depending on the level of physical trauma and other factors. But regardless of the degree of injury to the brain, the importance of properly treating these brain injuries is paramount in preventing long-term complications, especially for teens with developing brains.

Untreated Concussions Due To Lack Of Symptoms

Athletes who suffer any physical trauma to the head or brain may not experience symptoms for hours or even days following the initial impact. This, combined with young athletes’ tendencies to push through injury so they can play the sports they enjoy, creates a potentially devastating situation if the athlete continues to participate in sports with an untreated concussion.

“During a game, your adrenaline is going and you’re pumped up, so it’s easy to brush it off,” Nahm added. “But whether you bump your head during sports, a car accident, a fall or during military activity, it may not be until that night or a few days later that you get a headache or start to feel dizzy or nauseous.”

A person who has suffered a head injury will be able to tell if they may have suffered a concussion by identifying any of the following symptoms:

A person who returns to physical activity – regardless of how strenuous or risky – before receiving treatment and without allowing the brain to heal could potentially suffer second impact syndrome (SIS), which occurs when a person suffers physical brain trauma while the brain is still recovering from a previous traumatic brain injury. This is just another reason that untreated concussions can be extremely dangerous and even fatal, particularly with young athletes.

If you believe that you or a loved one has suffered a traumatic brain injury through no fault of your own, the first step is to seek medical attention and evaluate the severity of the injury.

If the injury is severe and the victim will require long-term treatment or care, they may benefit financially from consulting with a personal injury attorney. If you would like to schedule a free legal consultation with the Davis Law Group, P.S., contact us today at (206) 727-4000.