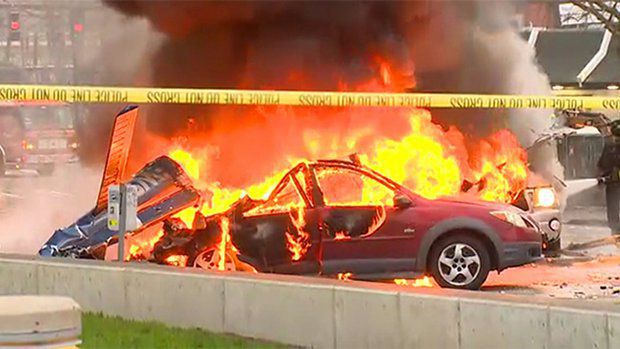 Seattle Fire Department (SFD) officials say that two people were killed in a helicopter crash, with the helicopter landing on top of at least three vehicles near the Space Needle in Downtown Seattle Tuesday morning.

Officials say that several additional people were injured in the incident, and that one of them was taken to the hospital in critical condition to receive treatment for their injuries.

According to news reports about the incident, the helicopter was taking off from Fisher Plaza – home of KOMO News – at approximately 7:45 a.m. Tuesday when it appeared to lose control and came crashing to the ground. As can be seen in the image above, the helicopter landed on top of multiple vehicles on the ground before exploding into flames.

“When he went to take off, the sound of the helicopter changed kind of drastically and I looked and the helicopter was almost immediately pitched sideways and off balance and he kind of nose-dove over the trees and clipped the top of the trees and crashed on the other side of the street,” Bain said.

According to SFD officials, two people who were on-board the helicopter at the time were pronounced dead at the scene when first responders arrived. In addition, an unidentified 37-year-old man was taken to Harborview Medical Center and was listed in critical condition as a result of suffering serious burns across more than half of his body.

Two additional people – who witnesses said may have been inside vehicles that were struck by the helicopter as it crashed – were able to walk away from the scene without any severe injuries. They were being checked out by first responders at the scene but were otherwise expected to be alright.

Police and fire officials say that the Federal Aviation Administration (FAA) and National Transportation Safety Board (NTSB) will begin investigating the incident to determine any contributing factors and establish what may have been done to prevent the helicopter crash from ever occurring.

Determining Cause and Establishing Liability

According to various news reports that have surfaced since the incident occurred, the helicopter involved in the crash was owned by Helicopters Inc. and was shared between KING 5 News and KOMO 4 News.

Helicopters Inc. has reportedly issued a statement about the incident that suggests that the helicopter may have struck a construction crane as the pilot was attempting to take off. News reports have been clear in stating that those claims have not yet been confirmed, and investigators will likely work to determine if a collision actually occurred.

There are clearly a lot of questions surrounding this incident and the results of the FAA and NTSB investigation should be able to help determine whether any negligence may have contributed to the crash. Establishing liability will be a key development in the progression of this investigation and determining whether or not a wrongful death claim may be pursued on behalf of the victims of the crash.