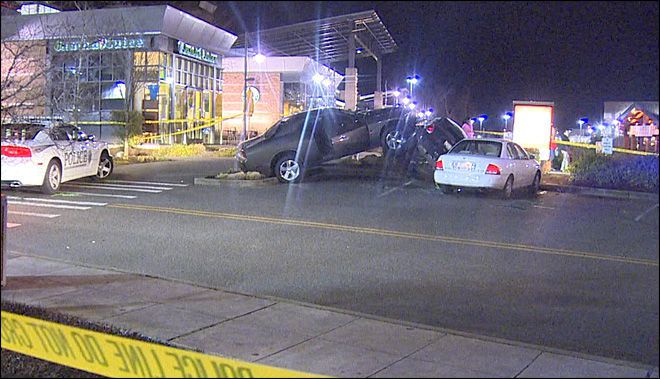 Two people are recovering from injuries sustained in a car accident that occurred in a parking lot at the Alderwood Mall in Lynnwood Sunday evening.

Police say that mall security identified a 19-year-old man as a potential wanted felony suspect Sunday and alerted authorities of his whereabouts. One officer was attempting to stop the man for questioning when the teen crashed into him with his vehicle.

The driver continued to evade arrest and drove off further into the parking lot before crashing into two parked cars, one of which contained a 25-year-old woman from Snohomish.

The police officer suffered a significant leg injury and was taken to a nearby hospital to be treated. The woman inside the parked car was injured as well, but police say her injuries were not serious and she was expected to recover.

Parking lot accidents can be tricky for people who have suffered injuries because most parking lots are considered private property. Because of this, police will often not respond to calls of an accident that took place in a parking lot, except in rare cases of serious injury.

Because this was a criminal act on the part of the at-fault driver, police were there to document the details of the accident and likely the injuries that both parties sustained. The police officer was injured on the job, and his case can be resolved through a worker’s compensation claim.

The woman in the parked car, on the other hand, will have to file an insurance claim with her own car insurance company to be compensated for her medical bills and any other damages that she suffers as a result. Since it is unlikely that the wanted felon was carrying adequate car insurance, the woman will likely only be compensated if she has personal injury protection (PIP) coverage in her policy.