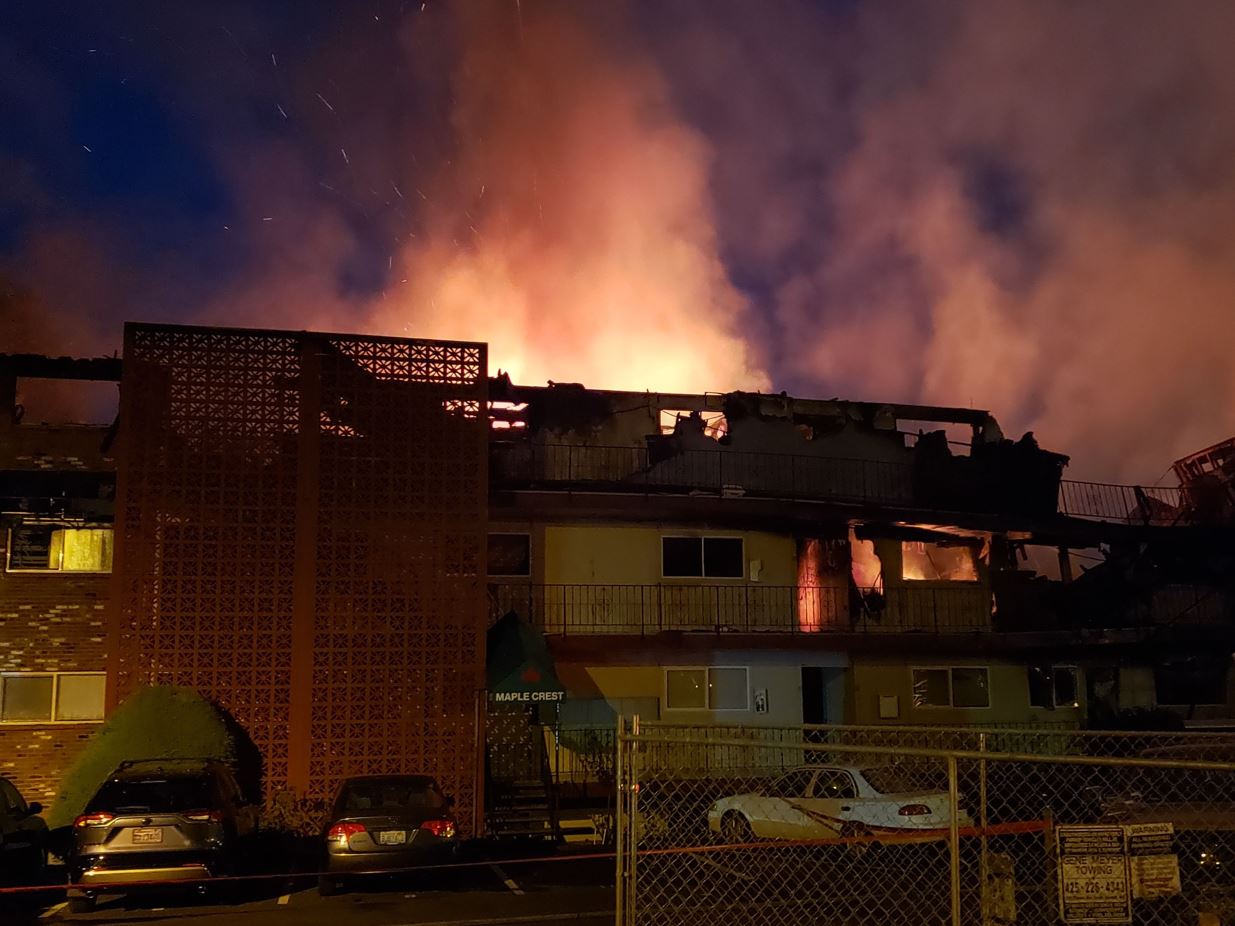 Two adults and one child have died in an apartment fire in Tukwila that started early Tuesday morning. The range of the fire also forced evacuations due to landslide risk, according to fire officials.

Crews had trouble fighting the fire due to the placement of the building against a hill. It did not allow for any firefighters or equipment to get to the back of the building, so crews were left fighting defensively for much of the day.

Update: This fire is confirmed to be a fatality. 1 adult and 1 child confirmed deceased. 5 others that were previously reported as unaccounted for have been located and safe. We still have not had full access to search the building. Portions of the roof have begun to collapse. pic.twitter.com/mQrtXL1kIt

Due to the volume of water used, and the placement of the building on a hill, a nearby apartment complex was evacuated because of the risk of landslide.

According to reports, the fire has been largely extinguished, but crews are still on site to keep an eye on hot spots.

A spokesman from the Tukwila Fire Department told reporters that they were still determining if smoke detectors and fire alarms were working in the building.

The repercussions of a home or apartment fire are intense. People can lose everything they own, end up badly burned or lose their lives. The recovery process will be hard enough without also having to grieve the loss of a loved one or neighbor. Depending on the circumstances of the fire, some of that pressure may be alleviated by compensation from an insurance claim.

For the fire mentioned in this article, if it was found that the smoke detectors and fire alarms were not properly functioning, a claim may be able to be brought against the landlord’s insurance. It is mandated by Washington state law that landlords must provide working smoke detectors throughout units. Clearly, they are a vital piece to saving people’s lives. If a smoke detector or fire alarm is not properly functioning, it can inhibit people’s ability to become aware of the fire and safely escape.

In this case, if it was found that the three people who tragically died were unable to get out due to late notice because of faulty or non-functioning equipment, their surviving family members may be able to file a claim for wrongful death, depending on If the equipment was not functioning when the tenants moved in.

Additionally, if the cause of the fire is determined by the fire department to be due to the negligence of the landlords, anyone who was injured or the surviving family of those who lost their lives may be able to submit an insurance claim.

Liability determination in residential fires is extremely complicated. People may be left with nothing and no way to start over if there is no insurance, or liability is placed on an individual without renter’s insurance. If you or your loved ones were the victims of a residential fire, it may be in your best interest to contact an experienced attorney for a consultation. A lawyer who has been practicing personal injury or wrongful death law for many years will be able to determine if you have a case to file a claim, and if you can benefit from hiring an attorney, or if you can settle the claim on your own.

The legal team at Davis Law Group has been helping victims of residential fires and their families for over twenty years and offers free case evaluations for those in their recovery process. To request a meeting call (206) 727-4000 or use the chat or contact form on this page.