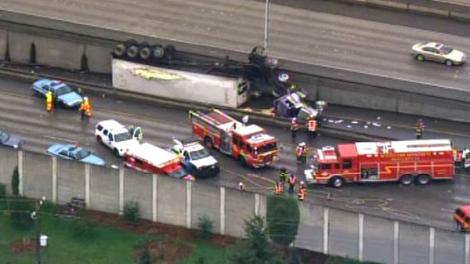 In an effort to increase the profitability and transportation capabilities of the U.S trucking industry, the American Trucking Association recently began lobbying Congress to allow for heavier semi trucks on American roadways.

The current weight limit for semi trucks in America is 80,000 pounds, and that limit was enacted into law in 1991. However, the industry wants to increase this limit to approximately 97,000 pounds, which would allow the trucks to be more powerful and, as a result, carry a bigger load.

Statistically speaking, we are talking about an approximate 25 percent increase in the overall size and weight of these already gigantic vehicles. Such a significant increase in weight would create more stress on roadways and other infrastructure which would present a significant financial burden to the public.

Safety advocates are natural opponents to this proposal as well, as larger semi trucks would mean greater risk of injury in the event of a semi truck accident. 80,000 pounds of steel can do a lot of damage to the average vehicle, and adding nearly 20,000 pounds to that could significantly increase the risk of serious injury or death in the event of a collision.

Currently, a person who is involved in a semi truck accident is twice as likely to be killed as someone involved in a collision involving the average motor vehicle. Because semi trucks are designed for transporting massive payloads, safety is not necessarily a primary concern for semi truck engineers.

Truck drivers inherit an increased risk of injury or death as well because larger trucks would be harder to operate and stop in the event of an emergency.

Since safety is already a low priority for manufacturers, it would be safe to assume that this would not change if the industry was successful in lobbying Congress to allow for even larger semi trucks on the nation’s highways. This would likely cause significant increases in the injury and fatality rates for people who are involved in semi truck accidents.