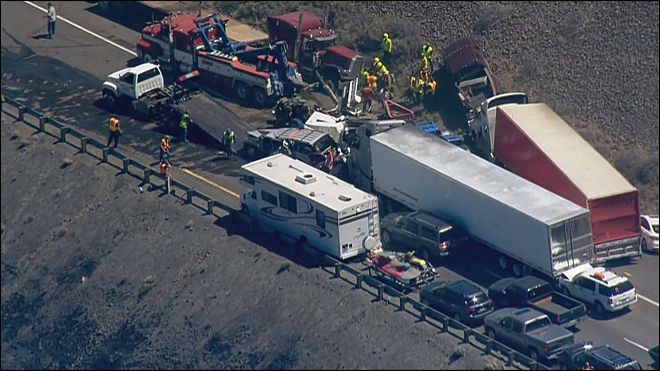 Officials with the Washington State Patrol (WSP) say that a 24-vehicle car accident that injured 11 people on Interstate 90 near Vantage was largely caused by poor visibility resulting from the massive wildfires that have plagued central and eastern Washington.

According to Trooper Darren Wright, the crash occurred on Interstate 90 near Kittitas just before 11 a.m. Thursday. Among the 11 people who were injured in the collision, Wright says some suffered serious injuries and had to be taken to nearby hospitals.

The crash was reportedly caused by poor visibility resulting from strong winds that had kicked up dust and ash left by a previous brush fire. Officials added that they planned to close a large stretch of eastbound I-90 until visibility improved.

“It’s depending on conditions,” Wright said when asked if the stretch of highway would re-open to traffic soon. “We want everybody to be safe.”

Crashes Caused by Wildfires and other Natural Phenomena

Washington state and Oregon are currently battling more than a dozen wildfires that pose a threat to the safety and well-being of residents throughout the region. Nearly 900 families were forced to evacuate the eastern Washington town of Leavenworth after heavy ash polluted the area and fires approached peoples’ homes.

In many cases, insurance companies will deny claims for property damage and personal injury on the premise that the incident was caused by an “Act of God,” which is a common insurance term used to refer to natural disasters and other unforeseen events. Unfortunately for accident victims, many insurance policy contracts have built-in language that protects the insurance company from being held financially responsible for damages.

As a result of these common insurance company defense strategies, there is a possibility that pursuing a personal injury claim could quickly become a complicated and difficult process for not only the victims of this particular crash, but for any motor vehicle collision that may have been partially caused by a natural disaster of some sort. It is often in the best interest of accident victims to consult with a Washington personal injury attorney if their claim is either denied or devalued by the insurance company.