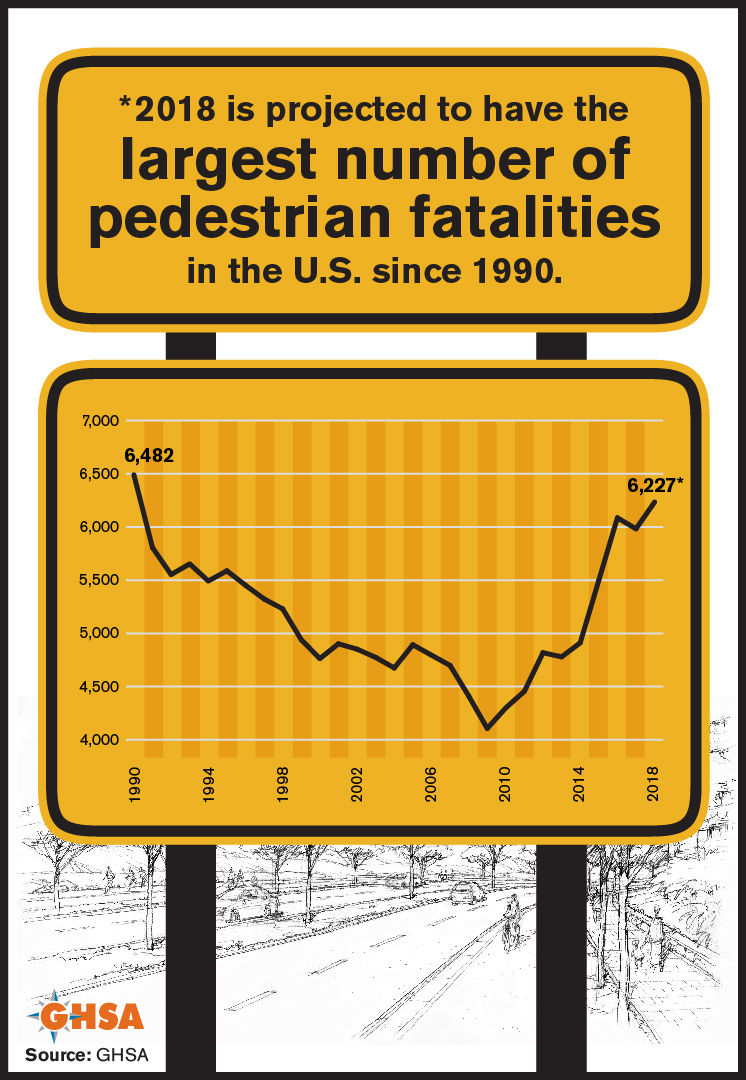 In total, at this time the GHSA estimates the total number of pedestrians killed in crashes through 2018 to be as high as 6,227, which would be an increase of 4% over 2017.

While increases in and of themselves could be concerning, their relationship to an overall trend in recent years is what was most alarming, as the number of pedestrian deaths year over year has been increasing since 2009, and if their estimation holds true, would make this the deadliest year since 1990.

Looking at this trend, from 2008-2017 there has been a total increase of 35% in the number of pedestrian fatalities and this figure does not include 2018's figures which would further increase the percentage of growth.

Facts From The Report 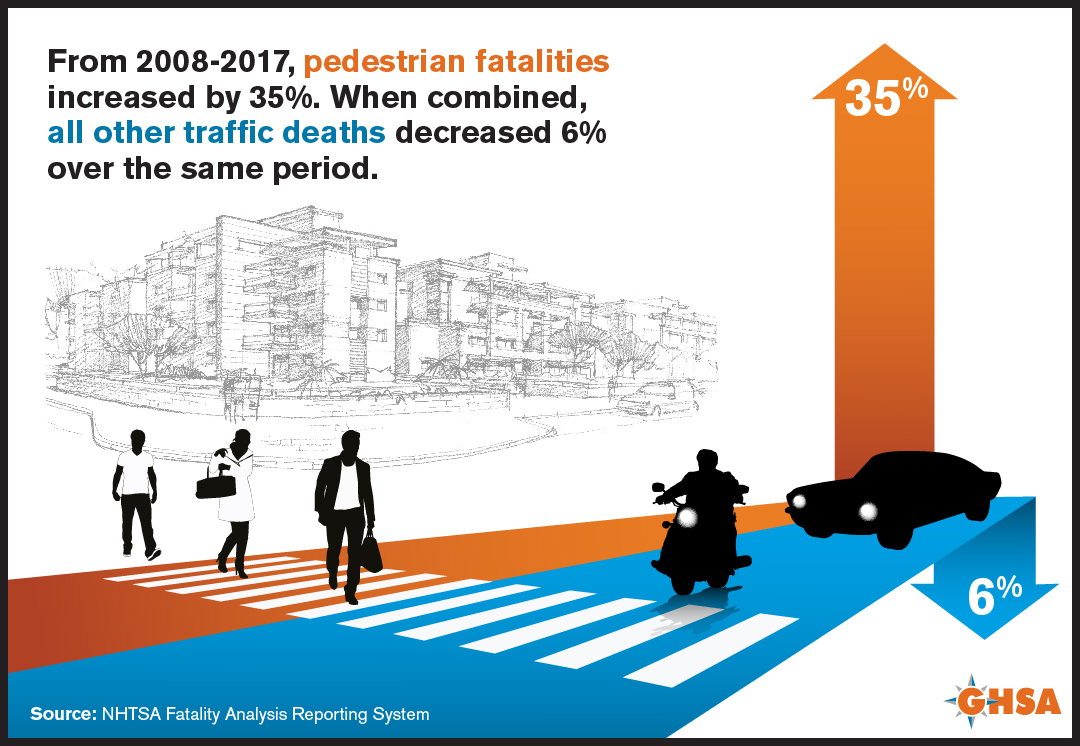 The potentially perplexing part of the data however is that over this same period of time, all other traffic deaths have seen a net decrease of 6%, which while not being as staggering a figure, is meaningful considering the all encompassing nature of the data included.

Interestingly, the data shows that when it comes to alcohol use, in 2017 17% of fatalities involved a driver with a reported BAC over 0.8, while 32% of pedestrians were found to be over the legal limit.

What Does This Mean For Washington State? 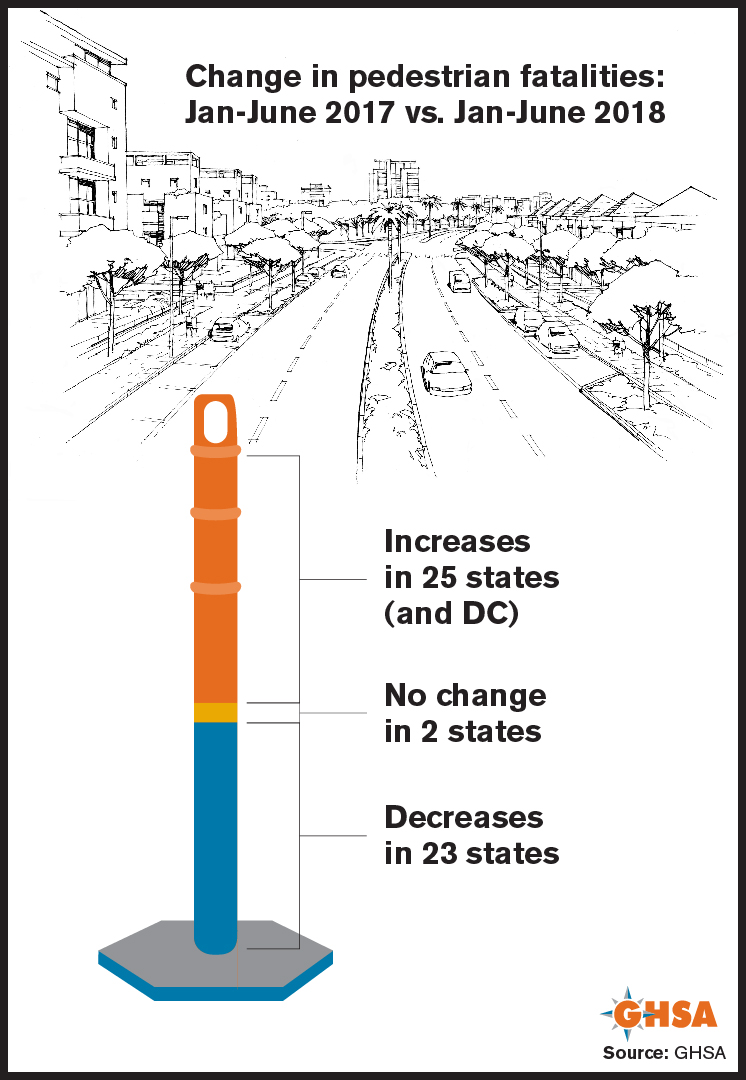 While this study was conducted on a national level, state to state data was recorded and reported as well.

When viewed from a state to state level, it becomes clear that this problem is not necessarily universal, with 23 states having decreases from 2017 to 2018, and just 25 seeing an actual increase. Most surprisingly five states, CA, AZ, TX, FL, and GA account for 46% of all pedestrian deaths in the first 6 months of 2018, while being home to just 33% of the population.

Unlike this study on Washington drivers in 2017, our state is actually among the minority that the report shows a reduction in pedestrian fatalities from 2017 to 2018.

Washington State saw a drop of 4% from the year prior with 44 fatalities in the first six months of 2018 vs 46 in the same time period in 2017. When adjusted for population Washington had 0.59 pedestrian fatalities per 100,000, tied with Michigan, with just 18 states having a lower per-capita percentage.

The report also included a state to state breakdown of what efforts are being made to reduce pedestrian fatalities, including efforts from Washington State. According to the report, some cities are adding curb bulb-outs, protected left turn lanes, traffic calming measures as well as adjusting pedestrian crossing intervals at crosswalks.

For more information, the full report from the GHSA is available here.

While a reduction of Pedestrian Fatalities of any amount is clearly a win for public safety in the state, especially contrasted with the projected increase across the rest of the nation, it's clear that more efforts are required if goals set by groups like "Target Zero" are to be achieved. The modest decrease of just two fatalities could eventually prove to be nothing more than the margin of error after the second half of the years results are analyzed.

With the sharp increase in fatalities happening at night, viability appears to be a clear target for improvement, and public education about visibility and being alert as a pedestrian could also prove invaluable for continuing to reduce pedestrian fatalities in the state.

We have more detailed statistics on pedestrian accidents in Washington State as well as the city of Seattle specifically available here.

For now though, pedestrian fatalities are a reality that we as citizens have to live with, and reports like this while promising, should serve as a reminder to be aware and be safe on the streets, whether in a car, on a bike, in transit, or walking.

If you or a loved one have been injured in an accident, the award winning pedestrian accident attorneys from Davis Law Group are here to help, call 206-727-4000 or use the chat or contact options on this page to request a free case evaluation.