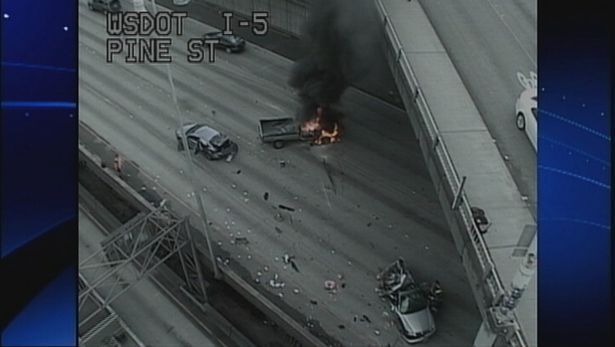 Washington State Patrol (WSP) officials say they believe a three-car crash that occurred on Interstate 5 near the Washington State Convention Center Tuesday morning was caused by a distracted driver.

According to Trooper Chris Webb, the collision occurred at approximately 8:20 a.m. Tuesday on I-5 near the Olive Way exit. Webb says investigators believe the crash was at least partly caused by the driver of a pickup truck who dropped his cell phone on the floor and looked down to pick it up.

By the time he shifted his attention back to the roadway, he rear-ended a car in front of him. That collision also caused a third car to be struck, though it was not entirely clear by which vehicle.

The pickup truck caught fire as a result of the collision, and the Washington State Department of Transportation (WSDOT) was forced to reverse the direction of the express lanes in order to relieve traffic congestion.

An unidentified 67-year-old man was taken to Harborview Medical Center in Seattle to be treated for undisclosed injuries. Webb says the man was hospitalized as a “precautionary measure.” That should be taken with a grain of salt, however; police officials often make this claim to news reporters long before anyone is truly able to know the extent of an accident victim’s injuries.

The three-car collision was one of several occurring in the area on Tuesday morning. A semi truck driver was reportedly injured after his truck overturned on a junction ramp from Highway 167 to I-405 in Renton. Webb said initial reports indicate the truck driver may have broken his arm in that crash.

Webb alluded to a continuing weather-related trend for collisions in the area as of late, pointing out that more crashes occur on the first rainy day after a stretch of sunny days as a result of oil slicks that build up and create dangerous conditions in even light rain.

While weather may be partly to blame, it is important to keep in mind that the truck driver who caused the multi-vehicle collision on I-5 admitted to using his cell phone in the moments before the crash occurred. If it is determined that the truck driver was acting negligently in causing the crash, he may potentially be held liable for the injured man’s injuries in a civil claim.