This Is Seattle’s Worst Intersection 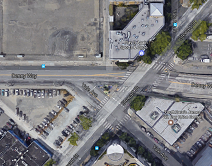 Readers of The Urbanist have put in their yearly votes for the worst intersection in Seattle. The clear winner was the intersection of Denny and Stewart, a complicated mess of intersecting roads, crosswalks, and transit priorities. The Urbanist has been polling readers on their intersection complaints for years. In their five iterations of the poll, intersections on Denny Way have won three times.

“If Seattle founding father Arthur Denny had lived past the 19th century, he probably would have been hit by a driver at an intersection along Denny Way by now,” writer Troy Heerwagen said in his critique of the intersection.

(Image: The intersection of Denny Way and Stewart Street, as seen from above on Google Maps.  Image source: The Urbanist)

Safety Concerns In A Busy Neighborhood

It’s no secret that the intersection is a mess. Denny Way is a busy thoroughfare, and the intersection sits right before its steep climb up Capitol Hill begins. Stewart Street cuts in at an awkward angle. Yale Avenue also branches off from Denny before intersecting with Steward street. That means that pedestrians have to cross an awkwardly shaped patch of ground that’s much more complicated than a normal four-way intersection.

A small triangular patch has been left in the middle of the three streets as a bus stop and pedestrian waiting area. Because drivers on that route frequently use extra-long articulated buses, a bus arriving in the wrong part of the light cycle can block crosswalk access for pedestrians. Yale Avenue is also part of a route leading to an Interstate 5 on-ramp, and traffic waiting for access to the interstate can also back up into the intersection.

Denny’s sidewalk also cuts out on the north side as it crosses I-5, forcing pedestrians on the north side of the street to cross to the south side just to continue up the hill. There is no bike lane where Denny Way crosses over I-5, which means that people on foot must share the path with bicyclists traveling down the hill at high speed.

For many people, skipping this tricky intersection just isn’t an option. Denny Way is one of the only streets that crosses over Interstate 5; drivers and pedestrians who need to travel between South Lake Union and Capitol Hill don’t have any other direct routes. Finding an alternate route onto Interstate 5 would also involve a significant detour. The intersection is also right in the middle of an area with lots of residents and businesses, and a center for homeless youth sits at one corner, so pedestrian traffic will always be high.

The Urbanist’s previous winners in its “Worst Intersection” poll could be fixed with relatively straightforward improvements. Unfortunately, there’s no simple fix for Denny and Stewart. Traffic backups from drivers trying to get on I-5 will be a persistent problem, and crowding on the interstate is only expected to worsen as Seattle keeps adding new residents while it weathers the worst housing crunch in the city’s history.

Better enforcement might help prevent private citizens from blocking the crosswalk with their vehicles, although it wouldn’t prevent buses from blocking the intersection. The Urbanist also recommends banning right turns on red from Stewart to Denny. They also suggest that adding a sidewalk on the north side of Denny Way.

In its boldest recommendation, The Urbanist suggests using congestion pricing to change driver behavior. If drivers entering I-5 from Yale Street had to pay an additional fee, some might choose an route.