The lecture and group discussion will cover the most important technology innovations in the transportation industry and the major impact they will have on the future of automotive insurance.  The primary focus will be on telematics devices (aka, car insurance tracing devices) and vehicle automation (aka driverless car technology).  Technologies, safety concerns, legal issues, insurance, etc.

Attendees will gain a clear understanding of…

Historically insurance premiums were based on demographic information and risk factors.

In recent years auto insurers have also started to incorporate behavior-based credit scores from credit bureaus into their analysis.  Why?  People who pay their bills on time are also safer drivers.

But telematic devices (aka usage-based insurance or UBI) add another data dimension.

“Insurtech” is the term being used to describe the new technologies with the potential to bring innovation to the insurance sector and impact the regulatory practices of insurance markets.

Telematic devices follow the driving habits of insurance customers---behavioral economics.  Think of them as a virtual black box.  Two examples are:

When you install a tracking device in your car, it taps into the vehicle’s various computer systems to capture, store, and transmit data.

Most telematics devices are small pieces of hardware that plug into your car’s on-board diagnostics port (OBD-II port)—same port used by emissions test centers or mechanics.  Most modern cars built in the last 25 years or so have OBD-II ports.  Or some integrate with General Motors OnStar Smart Driver system.

Once collected data is wirelessly transmitted to the insurance company, or a third-party company that they employ to analyze the data.

Most insurance companies have some sort of telematics program.  Major players include:

Approximately 70 percent of all auto insurance carriers are expected to use telematics UBI devices by 2020.

PEMCO insurance has launched a multi-city Safest Driver competition using it’s own telematics phone app.  PEMCO partners with local transportation departments to brand and promote the app and gives away thousands of dollars in weekly, monthly and grad prizes.  Drivers turn over their data which PEMCO uses to promote/sell their products and to pre-populate their driver behavior database.

What do telematic devices and apps track?

Some insurance companies disclose what their devices track.  Some don’t.  Some use just a few data points others use them all.  It’s up to customers to decide whether or not those terms are acceptable to them.

When data points are linked to map data insurance companies can determine:

Some insurance companies are partnering with auto manufactures to get even more data such as how often high-tech safety features are activated: automatic emergency braking and forward collision warning.

What Is In It For Drivers/Customers?

Drivers are rewarded with possible discounts if:

But what about things that are out of your control but can negatively impact how the data appears?

Some proponents say that the devices encourage ‘behavior modification’ as it causes people to make an extra effort to pay more attention to traffic rules.

A study by the University of British Columbia in partnership with Purdue University which was released in January 2019, found that telematics/UBI users tend to improve the safety of their driving in general.  And decrease their daily number of hard brakes by an average of 21 percent after six months.

Other say that the benefit is not enough to give up privacy.

Since most car crashes are caused by human error, in theory, taking control of the moving vehicle away from the driver is expected to drastically reduce highway fatalities.

6 Levels of Autonomy - Describes The Sophisticated Level of the Technology

Definitions defined by the Society of Automotive Engineers and adopted by the U.S. National Highway Traffic Safety Administration (NHTSA).

Most experts agree that the technology is at level 2.

Every Tesla built since late 2016 comes with 8 cameras around the car, 12 proximity sensors embedded into the front and back bumpers and radar in the front bumper.  Features include:

Who Reads The Vehicle Manual?  Nobody!

Will traffic accidents become a thing of the past?

Hardware and software reliability and compatibility will be the biggest issues.

Think about your laptop or PC and all the problems that you have had with them over the years.  No apply it to an automobile.  Scary!

What is holding back driverless technology and adoption?

How will the government regulate AVs?

Timing: When Will We Start To REALLY See Driverless Cars?

What Is A ‘Safe’ Vehicle?

According to NHTSA regulations and standards, at the most basic level a safe automated vehicle must be able to achieve four performance goals?

NHTSA is working with industry and academia and performing research on how self-driving vehicles could reliably and objectively demonstrate that they can achieve these four critical performance goals.

Who Might Be Liable For A Driverless Car Accident?

"After all, we are only human."

Are we going too fast on driverless cars?, Science Magazine, December 14, 2017.
https://www.sciencemag.org/news/2017/12/are-we-going-too-fast-driverless-cars

The effectiveness of real-time monitoring of drivers by insurance companies, Institute for Operations Research and the Management Sciences, February 7, 2019
https://phys.org/news/2019-02-effectiveness-real-time-drivers-companies.html 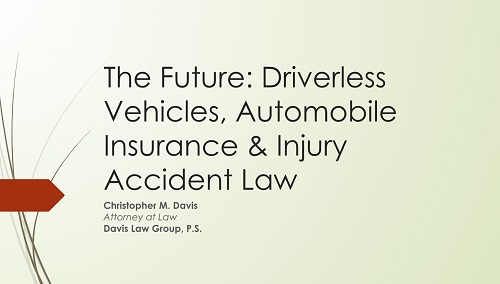