Teen Driver Passes Out Behind the Wheel, Crashes into SUV 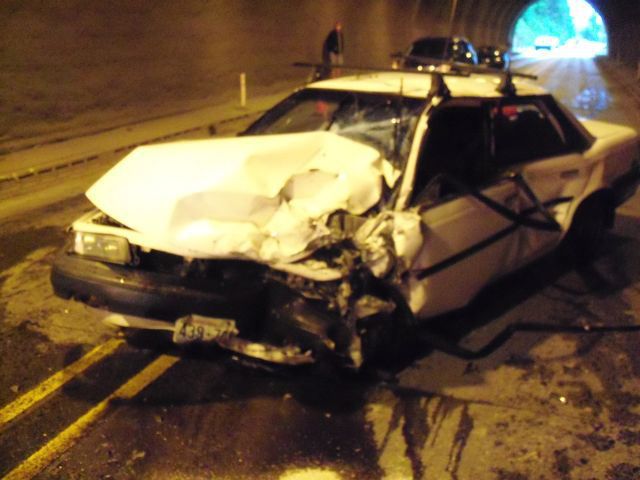 Oregon police say that a teenage driver caused an accident when he was holding his breath as he drove through a tunnel in Oregon when he passed out behind the wheel and crashed head-on into an SUV Sunday evening.

Police officials say that 19-year-old Daniel J. Calhoon, of Snohomish, Wash., was driving on Highway 26 near Manning when he crashed head-on into an SUV traveling in the opposite direction. Calhoon’s vehicle caromed off the first impact and then struck a second vehicle that was carrying two other passengers.

According to Lt. Gregg Hastings of the Oregon State Police, Calhoon was driving a 1990 Toyota Camry sedan with another 19-year-old passenger when he approached a tunnel on the highway. Hastings says the teen admitted to holding his breath as the vehicle entered the tunnel, which then caused him to lose consciousness. Calhoon’s vehicle allegedly then crossed the centerline of the highway and crashed head-on into an SUV before striking the tunnel walls and colliding with a third vehicle.

Calhoon and his 19-year-old passenger, identified as Bradley Meyring of Edmonds, Wash., both suffered non-life-threatening injuries in the car crash. Meyring was reportedly recovering from a collapsed lung at the hospital and is expected to recover fully.

“He has a collapsed lung, and he has a big scratch across his chest from his seat belt,” says Vance Meyring, an officer with the Oregon State Police and brother of Bradley Meyring. “It sounds like the seat belt obviously saved him, which is good he was wearing that otherwise he wouldn’t be here.”

Thomas Hatch Jr. and Candace Hatch, the passengers in the SUV that was initially struck by Calhoon, were also taken to a nearby hospital with minor injuries.

It would be an understandable knee-jerk reaction to assume that drugs and alcohol would be a contributing factor when a teenage driver causes a crash after passing out while behind the wheel. However, police say they believe the teen was simply playing a game by holding his breath as he passed through the tunnel.

Though its origin isn’t perfectly clear, the concept of holding one’s breath while traveling in a vehicle inside of a tunnel has been a popular game across the world for years. Some view it as a competition between passengers for who can hold their breath the longest, while others say it’s a game of superstition.

The tunnel, which is officially named the Dennis L. Edwards Tunnel, was built in 1940 and provides a path through the Northern Oregon Coast Range mountains for vehicles traveling on the highway. According to Hastings, the tunnel is 772 feet long – which means it would take approximately 10 seconds for a vehicle traveling at the 55 mph speed limit to get through the tunnel.