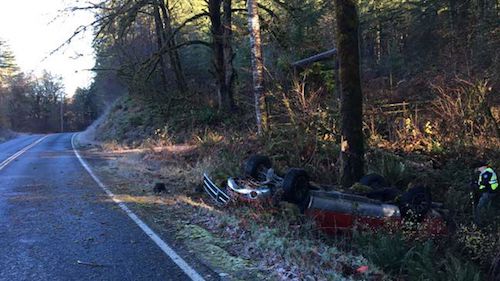 A 17-year-old boy was killed in a single-vehicle crash Monday morning in Yacolt, according to the Clark County Sheriff’s Office.

Emergency crews responded to the 3400 block of Northeast Kelly Road, about a quarter-mile from Gabriel Road, around 9 a.m.

The boy was a student at Battle Ground High School. His Dodge pickup truck crossed the center line, hit a tree and flipped upside down. He was the only person in the truck. Investigators said he was not wearing a seat belt.

A witness told investigators the pickup was “fishtailing” on icy roads before the crash.

According to multiple police and fire officials involved in Monday’s fatal crash, icy roads were likely a contributing factor. Clark County Fire District 10 chief Sam Arola said there was a lot of black ice in the area at the time of the crash.

Clark County Sheriff’s Sgt. Alex Schoening told KPTV that the crash a tragic reminder of just how quickly weather-related events can cause disaster.

“North of Brush Prairie, a lot of those roads stayed wet,” Schoening said. “We had fairly heavy fog last night, so there’s a lot of moisture still in the air and the temperature dropped, and those roads became a sheet of ice.

“We just ask that drivers be extra cautious, give themselves a lot more time, a lot more room, a lot more gradual slowing when braking. Where you think you’re on a wet roadway – all of a sudden, you’re sliding sideways – it can happen very, very quickly – and it’s all about preparation.

FOX 12 in Oregon contacted the Clark County Public Works Department. A spokesman with the department declined to say whether the road the crash occurred on had recently been sprayed with deicer, citing the ongoing investigation.

If you or a loved one has been involved in a teen driver accident, contact the car accident attorneys at Davis Law Group today for help. Call (206) 727-4000, use the chat feature below or fill out the form on the contact page to get started.