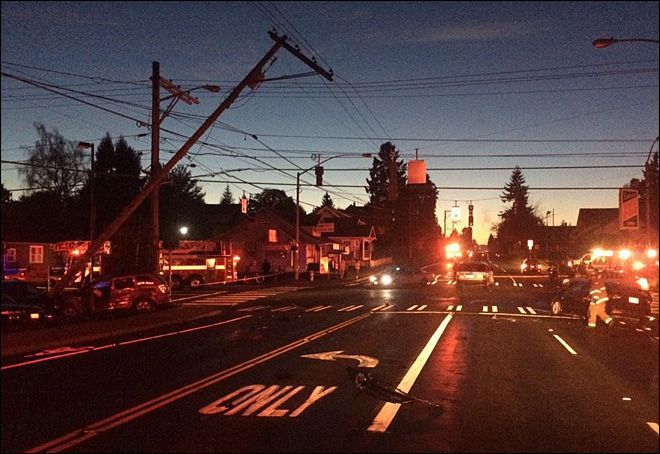 According to news reports, the incident began when a Tacoma police officer witnessed a vehicle driving erratically at 6th Avenue and South Stevens Street at approximately 6 p.m. Friday.

TPD Spokesperson Loretta Cool says that the officer initiated pursuit after seeing the driver sped through a stop sign at the intersection, and that the driver immediately began evading police. The driver was allegedly traveling at very high speeds and weaving in-between oncoming traffic.

After several blocks of pursuit, the suspect’s vehicle eventually crashed into two vehicles and then a power pole before finally coming to a stop. Witnesses subdued the suspect as he attempted to run from the scene on foot, and police placed him under arrest shortly afterwards.

In total, Cool says that eight people were reported to have suffered some form of injury as a result of the car crash. One person was in critical condition at a local hospital, while the severity of the others’ injuries was unclear.

The driver was taken into custody to undergo impairment testing, the results of which have not yet been announced. The impact of the crash into the power pole caused the neighborhood to lose power, and Cool was unsure when it would be restored.

In some cases, police have a duty to protect the public from being injured as a result of high-speed police pursuits like the one that led up to this crash. It doesn’t sound like the officers did anything to put the public’s safety at risk in this particular case, but it’s important to understand nonetheless.

Regardless of whether or not the crash was directly caused by the police chase, the injured victims would have the right to pursue a personal injury lawsuit against the at-fault driver and his insurance company.