4 Killed in Semi vs. SUV Collision on US 97 Near Toppenish 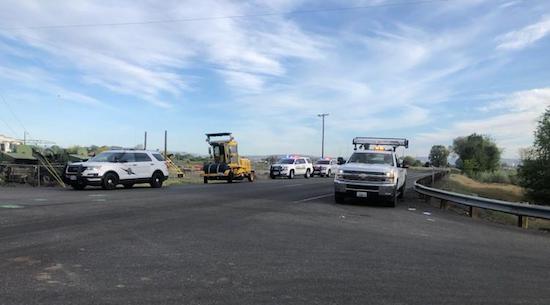 Four people were killed in a crash involving a semi truck early Tuesday morning on U.S. Route 97 near Toppenish.

The incident occurred just before 5 a.m. near milepost 60.8, Larue Road, about a mile south of Toppenish.

Police say six people were in a Dodge Durango SUV that was traveling west on Larue Road and crossing US 97 when a semi truck struck the SUV. Four people in the Durango were killed. One person was airlifted in critical condition while another, the driver, was transported to the hospital in stable condition.

The driver of the semi truck was also taken to a hospital with injuries.

Police believe that intoxication is a factor in the accident.

Further details are not available. The crash remains under investigation.

Why You Need a Truck Accident Lawyer ASAP

Regardless of the severity of the accident, victims involved in a semi truck accident should contact a truck accident lawyer as soon as possible. There are a lot of moving parts in these cases, and protecting your interests should be the first step.

Accidents involving semi trucks are almost always serious or deadly. Unfortunately, due to the sheer size of the trucks, the occupants of smaller passenger vehicles often pay the price for the fault of the truck driver and the trucking company.

Should such an accident occur, a Washington state truck accident lawyer is going to be the best way to ensure you, as a victim, get the kind of compensation deserved. Again, you are coming up against a major industry.

The following are things a qualified lawyer should do immediately after being retained:

If you are in shock and have sustained serious injuries, or have a family member that was injured or killed, you will likely not be in any condition to think about the lawsuit and handle all the above tasks.

Contacting a truck accident attorney as soon as possible, and having the firm and its legal team present at the accident site itself, can mean the difference in you getting maximum compensation for your injuries or settling for less.

At Davis Law Group, P.S., we encourage people who have been in a semi truck crash to reach out to our legal team quickly and talk with our team of personal injury attorneys at no cost. Our staff never pressures people to become clients, treats you with respect and caring compassion, and charges nothing to consult with our experienced attorneys.