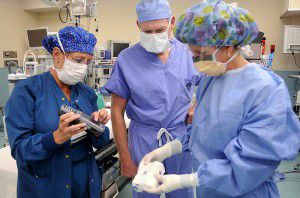 Typically sick or injured people don't even consider the possibility that the educated and experienced surgeon they have chosen to help them get well might make such a simple error such as forgetting to remove a surgical instrument (leaving something inside the body at the conclusion of surgery). Unfortunately, surgical items get left behind far more frequently than people realize.  Within the medical industry these cases are referred to as Retained Surgical Items (RSI).

Surgery can be very, very complicated. Precision is key. There is no margin for error. Items such as sponges, clamps, forceps, scalpels and other surgical tools are typically counted and recounted before and after a surgical procedure to make sure that nothing is left behind. But surgical tools are left behind in patients every day leaving patients to face additional operations to remove the abandoned equipment. Sometimes the mistake is not discovered for years and causes numerous other medical complications or death.

Medical professionals are more likely to notice a missing scalpel or. Soft materials such as gauze and sponges are very difficult to detect once they are soaked with blood and they can pose larger threat because they can fester inside a body causing serious infections.

One in every 5,000 surgical patients has a surgical object accidentally left inside them after the surgery is over.  Sponges make up to 40% of all retained objects. Estimates suggest that 54% of sponges are left in the abdomen, 22% in the vagina and 7% in the thorax.

The Journal of Radiology calls the leaving behind of surgical objects in patients a “highly underestimated problem,” and a recent report says that some 1,500 patients in the U.S. find themselves with foreign matter left in their bodies after surgery.

The official definition of a Retained Surgical Item (RSI) is a medical or surgical item intentionally packed by provider(s) that are unintentionally left in place.  Another similar definition is unintentional retention of a foreign object in a patient after surgery or other invasive procedure.

When sponges are left inside patients they often soak up pus and bile, literally rotting victims away from the inside.  Most patients have complained for months or even years about pain and other symptoms and often doctors tell them that there is no cause and that they are imagining problems.  Rotting sponges can often create problems in the surrounding tissue that causes major issues.

Victims of surgical mistakes such as these have a solid, easy-to-prove case of medical malpractice. Injuries and death due to surgical instruments left in the body do happen in Western Washington hospitals. Surprisingly these cases are not generally reported in the media. And studies have shown that hospital administrators under-report such incidents. Davis Law Group frequently receives calls from people who have been the victims of surgical mistakes at top notch hospitals such as Swedish Hospital, Virginia Mason and Seattle Children's Hospital.

Sadly the public never hears about most of these retained surgical item (RSI) cases because the settlement agreements typically bind the victim to silence due to confidentiality. But several years ago a series of multiple patients with surgical tools left behind at University of Washington Medical Center leaked to the press and created a PR nightmare for UW Physicians.

Because Davis Law Group is a Seattle medical malpractice law firm we have learned of similar cases of sponges left behind after surgery at Swedish Hospital and surgical instruments and sponges left in patients at Virginia Mason Hospital.   We have handled similar cases at other hospitals in Washington State as well.

If you or a loved one has been the victim of a surgical mistake or surgical equipment left in the body contact medical malpractice attorney Chris Davis at Davis Law Group to schedule a free legal consultation. Call 206-727-4000. The call is free. The information may be priceless.